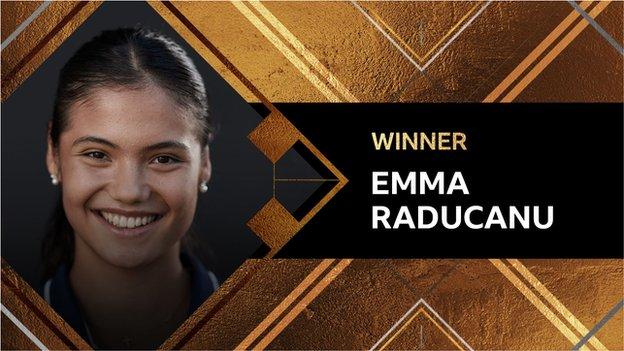 Teenage US Open champion Emma Raducanu has been voted BBC Sports Personality of the Year 2021.

Raducanu, then 18, ended Britain’s 44-year wait for a women’s Grand Slam singles champion with her remarkable victory at Flushing Meadows.

Her fairytale win followed a run to the Wimbledon fourth round in July on her Grand Slam main draw debut.

“It’s such an honour just to be among these nominees. Congrats to you and all your achievements,” Raducanu said.

“I’m really happy with this, I’ve watched Sports Personality of the Year growing up and it’s an honour to be among those past winners.

“I’m happy for British tennis as well, and that we’ve managed to get this award…again!

“Thanks to all the fans and voters, this year has been insane. The energy this year playing at Wimbledon in front of my home crowd, that was something I’ve never felt before.”

Now 19 and ranked British number one, Raducanu becomes the first female tennis player to be crowned Sports Personality of the Year since Virginia Wade in 1977 – the last British woman to win a Grand Slam singles title.

Andy Murray was the last tennis player to win the award, with his third coming in 2016. Raducanu is the first female to win the award since Zara Phillips, now Tindall, in 2006. 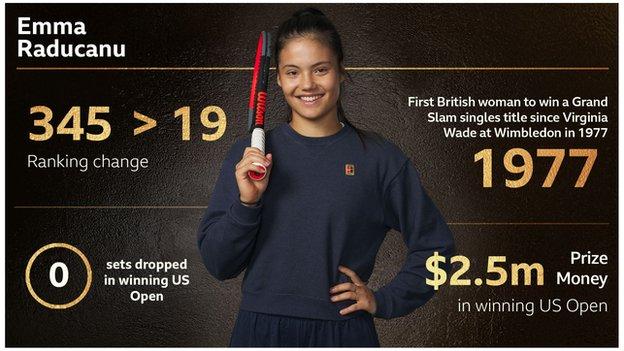 A year to remember

Fresh from completing her A-Levels, Raducanu burst onto the scene at Wimbledon, where she was handed a wildcard into the main draw late on after making her WTA Tour debut earlier in June.

Wins over impressive opposition and appearances on show courts followed as she progressed to the fourth round, and in doing so, became the youngest British woman to reach the Wimbledon last 16 in the Open era.

Her dream run ended in heartbreaking fashion as she was forced to retire from her fourth-round match with breathing difficulties – but little did anyone know what was around the corner.

In winning the US Open title in September with a 6-4 6-3 victory over fellow teenager Leylah Fernandez, Raducanu became:

She will enter 2022 ranked 19th in the world and with a new coach, Torben Beltz.

Presented by Gary Lineker, Clare Balding, Gabby Logan and Alex Scott, the Sports Personality of the Year 2021 was broadcast live from MediaCityUK, Salford.

Other award winners at Sports Personality 2021

Coach of the Year: Gareth Southgate