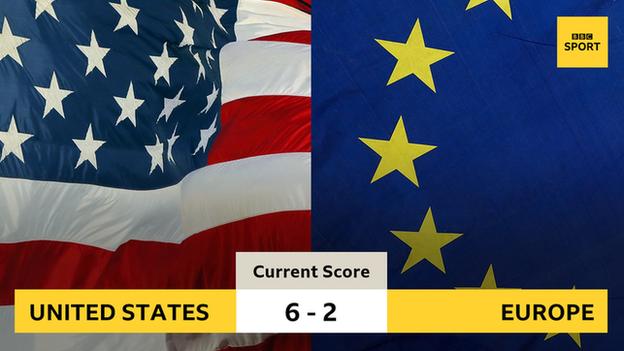 The United States opened their biggest lead after day one of a Ryder Cup against Europe by winning both of Friday’s sessions 3-1 at Whistling Straits in Wisconsin.

Bryson DeChambeau delighted the 40,000 home fans by pummelling a drive 417 yards down the par-five fifth, as the Americans lived up to their favourite tag.

It was a chastening day for the defending champions with Jon Rahm and Sergio Garcia Europe’s only winners, beating much-fancied home pairing Jordan Spieth and Justin Thomas 3&1 in the opening foursomes match.

Europe’s other point came from two halved matches in the afternoon fourballs as the wind strengthened, gusting up to 30mph.

Tyrrell Hatton holed a 10-foot birdie putt to win the 18th and his half-point, while Tommy Fleetwood and Viktor Hovland also picked up a half-point after being pegged back from three up after eight by Patrick Cantlay and Thomas.

But those were the only highlights on a miserable day for Europe, who largely struggled on the greens.

“No doubt it was a tough day. It isn’t a good start, but there’s still 20 points to play for.”

In contrast, the Americans holed putt after putt after putt, with Dustin Johnson and Tony Finau in particular excelling, to take a tight grip on the match.

However, US captain Steve Stricker warned his side against complacency.

“We’ve had some things that came up and bit us in the rear in other Ryder Cups,” he said. “These guys know that, and they are focused on coming out strong again.

“My message to the guys before I left was to try to win that first session again and pretend [Friday] never happened,”

After dominating the early foursomes, with the highlight being Cantlay and Xander Schauffele crushing Rory McIlroy and Ian Poulter 5&3, the fourballs went the same way for the Americans, with McIlroy again on the end of a heavy defeat – this time with Shane Lowry – beaten 4&3 by Finau and Harris English.

Europe did lead in the bottom three matches at various stages of the fourballs but the momentum shifted to the US in a 30-minute spell midway through the session.

World number two Johnson holed successive birdie putts of more than 15 feet on the 10th and 11th holes to put the US three up in the top match against Paul Casey and Bernd Wiesberger, while English and Finau combined for three birdies from the eighth to also lead by three holes.

Finau, who also rolled in a 15-foot putt on 13 to go four up, then holed a par putt to close out his match on the 15th. Moments later, Olympic champion Schauffele, playing with Johnson, did likewise on the 17th to put the US team 5-1 ahead.

The match that drew the most interest though was Scottie Scheffler and DeChambeau’s game with Rahm and Hatton.

Thousands lined the first fairway as DeChambeau’s wayward opener struck a woman on the leg. But Scheffler proved to be an excellent foil; his solid ball striking allowing big-hitting DeChambeau to play his natural game.

Indeed, DeChambeau hit a 417-yard drive down the par-five fifth to huge whoops and hollers from the fans, leaving himself a 75-yard wedge for his second shot, which resulted in a hole-winning eagle.

“I knew if it was a little downwind, I could take a unique line,” said DeChambeau.

But there was never more than one hole in it, with Rahm birdies on the ninth and 11th holes levelling the match after US birdies on eight and 10. A DeChambeau par on the 15th was enough to edge the US ahead again in what was becoming an increasingly important match for the visitors.

The players knew it too, with several Europeans gathering round round the 17th green. Hatton, who cut a disconsolate figure after missing several putts, saw a 25-footer to win the hole slide inches by but he atoned with a solid putt to win the last and halve the match.

The bottom match was a missed opportunity for Europe. Fleetwood and Hovland were two up after nine but the Englishman was wayward with two putts of under five feet on the 10th and 11th, which would have seen them go four up.

Cantlay then almost holed his tee shot to win the 12th and the lead was down to one hole.

Thomas then eagled the par-five 16th to level the match but Fleetwood and Hovland held their nerve to halve a tense final two holes.

Spaniards a shining light for Europe

The opening foursomes matches had set off on a still, but chilly morning, on the iconic course beside Lake Michigan that has staged the US PGA Championship on three occasions.

There were the expected pantomime boos on the first tee for Rahm and Sergio Garcia, drowning out the meagre support for the Europeans, with the tough Covid-19 travel rules stopping away fans from travelling to the US.

World number one Rahm, who spoke on Thursday about wanting to build on the “Spanish legacy” in the Ryder Cup, holed three birdies in five holes to put Europe two ahead at the turn against Spieth and Thomas in the top match.

Garcia then rolled in a 20-footer on the 15th to put Europe three holes ahead with three to play in the alternate shot format and guarantee at least half a point.

The match was closed out on the 17th despite a quite sensational shot from Spieth, who smashed his ball 80 feet into the air and landed it five feet from the hole from deep greenside rough before overbalancing and skipping down a steep bank towards the lake, pulling up just a yard or two short of the water.

But rookies Cantlay and Schauffele stunned experienced Europeans Poulter and McIlroy by winning the first five holes of their match.

Brooks Koepka and Daniel Berger likewise never trailed against Lee Westwood and Matt Fitzpatrick, eventually triumphing 2&1, while Johnson and Collin Morikawa pulled clear on the back nine to win 3&2 against Casey and Hovland. 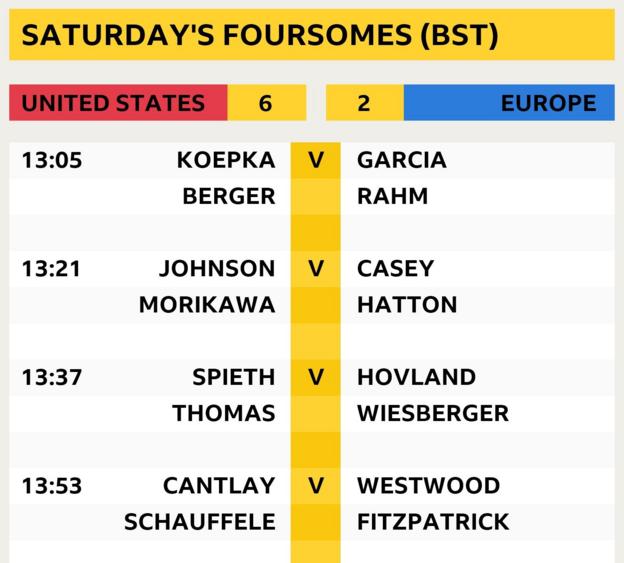 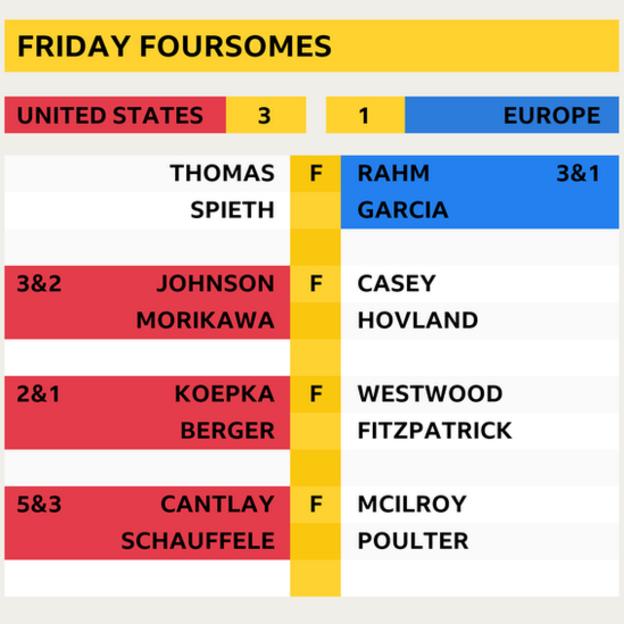 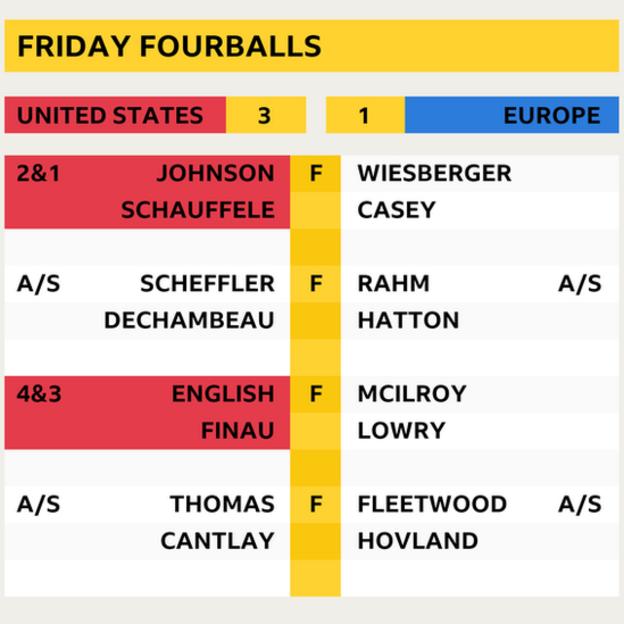