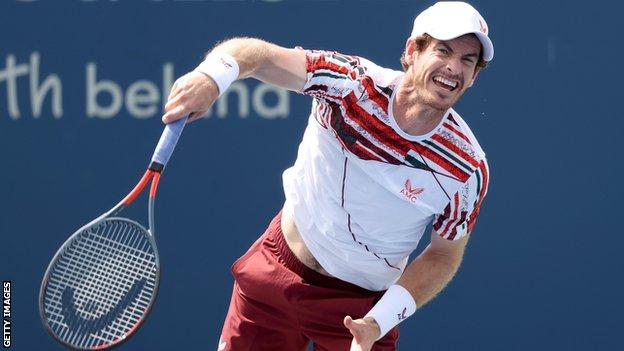 Andy Murray says players have a responsibility to the public as they travel around the world, and should therefore be vaccinated against Covid.

Many are reluctant to take the vaccine, and tournaments are yet to make it a condition of entry.

But with spectators at the US Open having to show proof of at least one vaccination dose, there is an increasing focus on the players.

“I’m hoping that more players choose to have it in the coming months,” he said.

Speaking before Monday’s first-round match with Stefanos Tsitsipas, Murray added: “Over the next few months things are going to probably end up changing quite a bit.

“I know the conversations with regards to the Australian Open are already happening. The players that have been vaccinated are going to potentially be able to – well, they’re going to be having very different conditions to players who are not vaccinated.

“They’re going to be allowing the players that have had the vaccination to train and move freely, potentially not having to quarantine.”

“I feel like I’m enjoying kind of a fairly normal life,” said Murray, who is fully vaccinated.

“Whereas for the players that haven’t, it’s different. I’m sure they’ll be frustrated with that.

“Ultimately I guess the reason why all of us are getting vaccinated is to look out for the wider public. We have a responsibility as players that are travelling across the world to look out for everyone else as well.

“I’m happy that I’m vaccinated. I’m hoping that more players choose to have it in the coming months.”

Vaccines have been available at every ATP and WTA tournament in the run-up to the US Open, but many players remain concerned that side-effects could disrupt their seasons.

On Saturday, an ATP spokesman said just over half of male players had been vaccinated. Tsitsipas and Novak Djokovic are among those who have not, and the world number one does not believe it should be made compulsory.

“I feel like that should be always a personal decision, whether you want to get vaccinated or not. I hope that it stays that way,” Djokovic said in New York.

Other than being able to enjoy indoor dining, vaccinated players at the US Open may not have to isolate if they are considered a close contact of someone who tests positive.

The unvaccinated will automatically be withdrawn in that eventuality, as has already happened to the French player Gilles Simon.

The question of whether player vaccination should be made compulsory will be a finely balanced decision for the Grand Slams, the ATP and the WTA.

Dan Evans, who could not compete at the Tokyo Olympics because he fell ill shortly before his second vaccine was due, said: “I would push for people to have it, but it’s a tough one, isn’t it?

“It would be good if we could keep each other safe with the vaccine, but there’s obviously people who have different opinions.

“But I don’t think they are pulling this vaccine out of the back of a lorry, are they? I’m sure there’s quite a lot of science in it to say it is good for us – that would be my take on it.

“The next shot I will definitely be getting.”