The worst violence in years between Israel and the Palestinian territory of the Gaza Strip has seen dozens killed. It follows a month of spiralling tensions before open conflict broke out. Here is what happened in the lead-up to the fighting.

Clashes erupt in East Jerusalem between Palestinians and Israeli police.

Palestinians are angry over barriers which had been placed outside the Damascus Gate entrance to the Jerusalem‘s Old City preventing them from gathering there after prayers at the Old City’s al-Aqsa Mosque on what is the first night of the Islamic holy month of Ramadan.

Palestinian discontent had been stoked earlier in the day when President Mahmoud Abbas called off planned elections&comma; implicitly blaming Israel over voting arrangements for Palestinians in East Jerusalem.

Hamas – Mr Abbas’ Islamist rivals who control Gaza and were running in the elections – react angrily to the postponement.

Rockets are fired from Gaza at Israel&comma; which responds with air strikes after a relative period of calm between Israel and the Palestinian enclave.

Clashes spread to the mixed Arab-Jewish port city of Jaffa&comma; next to Tel Aviv.

In Jerusalem&comma; Jewish youths&comma; angry over a spate of filmed assaults by Palestinians on Orthodox Jews posted on the TikTok video-sharing app&comma; attack Arabs and chant anti-Arab slogans.

Hundreds of ultra-nationalist Jews shouting “Death to Arabs” march towards Damascus Gate in protest at the Arab assaults on Jews. Clashes erupt at the site between Palestinians and police trying to separate the two groups&comma; injuring dozens of people.

Violence between Arabs and Jews spreads to other parts of the city.

President Abbas’ Fatah faction and Hamas condemn the looming threatened eviction of Palestinian families from their homes in the Sheikh Jarrah district of East Jerusalem by Jewish settlers ahead of a planned court hearing. Hamas calls on Arabs to form “human shields of resistance” there.

In the days that follow&comma; police and protesters repeatedly clash at the site as it becomes a focal point for Palestinian anger.

Two Palestinian gunmen are shot dead and a third is wounded after opening fire on Israeli security forces in the northern West Bank. Israeli authorities say the group planned to carry out a “major attack” in Israel.

Later on after Friday prayers – the last of Ramadan – major clashes erupt at the al-Aqsa mosque compound&comma; injuring more than 200 people. Israel’s police force says it used “riot dispersal means”&comma; firing rubber bullets and stun grenades after officers came under a hail of stones and bottles.

A second night of violence erupts in East Jerusalem after tens of thousands of worshippers prayed at the al-Aqsa mosque for Laylat al-Qadr&comma; the holiest night of Ramadan.

More than 120 Palestinians and some 17 police are injured.

Israel’s Supreme Court postpones the hearing on the Sheikh Jarrah case following calls to delay it because of the growing unrest. Tensions remain high though and more clashes take place between Israeli police and Palestinians in Sheikh Jarrah and at Damascus Gate.

Early morning clashes break out between police and Palestinians at the al-Aqsa mosque compound&comma; where crowds throw stones and officers fire stun grenades.

Palestinian anger has been inflamed by an annual Jerusalem Day march planned for later in the day by hundreds of Israeli nationalists to celebrate Israel’s capture of East Jerusalem in 1967.

The march is due to pass through predominantly Arab parts of the Old City in what is seen by Palestinians as a deliberate provocation. It is rerouted at the 11th hour&comma; but the atmosphere remains volatile with more than 300 Palestinians and some 21 police injured in the violence at the holy site. 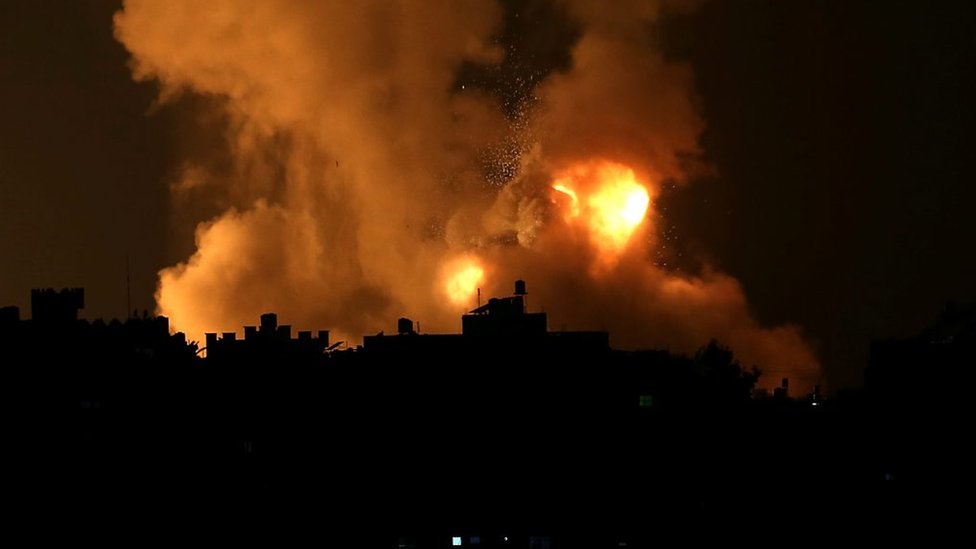 Media playback is not supported on your device.

Hamas issues an ultimatum to Israel to “withdraw its soldiers… from the blessed al-Aqsa mosque and Sheikh Jarrah” by 18:00. When the deadline passes without an Israeli response&comma; rockets are fired towards Jerusalem for the first time in years.

A continuing exchange of rocket-fire and air strikes quickly escalates into the fiercest hostilities between the two sides since they fought a war in 2014.