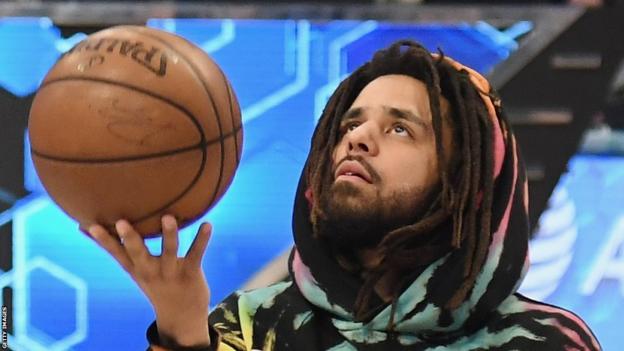 US rapper J Cole scored three points as he made his debut for his Rwandan side Patriots in the opening game of the inaugural Basketball Africa League (BAL).

Cole scored three points as his side beat Nigeria’s River Hoopers 83-60 on Sunday in Kigali, he also secured three rebounds and a pair of assists in the game, in which he featured for a total of 17 minutes.

The rapper – who was appearing just days after the release of his sixth studio album – has been one of the star names attached to the BAL, which is seeking to replicate the Champions League format from football but for basketball.

“I talked to him in the locker room – I said, ‘I am so proud of you,’ because he was very frustrated with himself,” Patriots coach Alan Major said.

“He had a couple of turnovers. I said, don’t put too much pressure on yourself – the only mistake he can ever make is to just not to try again.

All of the games are being played in one location – the Kigali Arena in the Rwandan capital – with multiple matches over most days between now and the final.

Cole had achieved a high standard at school but had never played basketball professionally before this match.

He was, however, offered a try-out at the Detroit Pistons team after Cole posted a video of himself playing the sport onto social media.

River Hoopers’ former NBA player Ben Uzoh, who scored first ever points in the BAL, said that basketball needed “entertainers” and that despite his team’s defeat, it was a “win for NBA Africa and the BAL.”