Tiger Woods has already achieved one of the greatest comebacks sport has ever known and now the 45-year-old golfer faces another mammoth challenge to simply return to full health, never mind compete again.

His playing career must be in serious doubt after the devastating injuries suffered in Tuesday’s shocking single-vehicle car crash in southern California.

Woods languishes, once again, in a hospital bed – an all-too-familiar scenario for a man who came through four back surgeries, including a fusion procedure, before winning the 2019 Masters, his 15th major title.

That Augusta win felt like a crowning moment to an extraordinary career which has been marked by incredible highs on the golf course and dramatic and painful lows away from the game.

Woods has been golf’s dominant personality for 25 years. At the height of his powers he was the biggest sports star on the planet.

He remains three short of fellow American Jack Nicklaus’ record of 18 major titles, a mark he looked certain to surpass in the first decade of this century.

Arguments rage over who was the greater player, but many contend no-one has ever played better golf than Woods in his prime. In the wake of the crash, former US President Barack Obama tweeted: “The GOAT (greatest of all time) of golf.

“If we’ve learned anything over the years, it’s to never count Tiger out.”

It is a valid point, Woods has often defied the odds in a career that has brought more than 100 professional wins, a record-equalling 82 of them on the PGA Tour.

But right now there are more pressing priorities. As basketball legend Stephen Curry, an ardent golf fan, stated: “At this point it is not about golf. It’s about quality of life and being there for his kids.”

Former world heavyweight champion Mike Tyson has urged Woods to “fight like the champion you are for your kids and the world” while tennis great Serena Williams said: “Love you big brother…. but we will get through this.”

Nicklaus led scores of messages of support from golf and all of the governing bodies have expressed their concern and best wishes on social media. 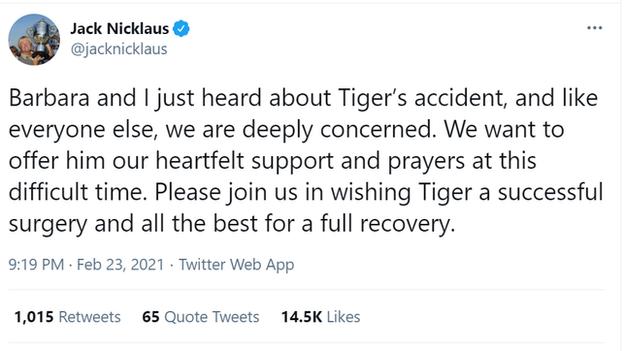 They know the importance of Woods to them and millions of sports fans across the world. No other individual has driven a major sport so dramatically and effectively.

Woods’ presence in the field for this April’s Masters was already in doubt following a fifth back operation after he felt discomfort last December. His now inevitable absence leaves a void, one that golf has been all too familiar with in recent years.

But already his legacy is immense. Because of his approach to the game, professional golfers are nowadays regarded as athletes when previously they were often the pudgy underlings of the sporting world.

Golf is now an Olympic sport after his influence helped drive readmission for the 2016 Games. He wanted to experience competing in Tokyo but that chance has now gone.

It is too early to know the long-term prognosis following the major orthopaedic surgery to his right leg, which is now held together by a rod, with pins and screws supporting his ankle and foot.

Inevitably comparisons are being drawn with Ben Hogan, the legendary Texan who recovered from career-threatening injuries when he collided with a Greyhound bus in February 1949.

Hogan was told he may never walk again. He suffered a fractured left ankle, double fracture of the pelvis, a broken collar bone and chipped rib.

But within a year he returned to action, ironically at the same Riviera course in Los Angeles where Woods was a non-playing tournament host last weekend. Hogan went on to dominate golf in a Woods-like manner starting with victory in the 1950 US Open.

When he won the 1953 Open at Carnoustie he simultaneously held three major titles (he couldn’t compete in the fourth, the US PGA because it clashed with the trip to Scotland).

Drawing parallels with Woods’ career is never easy, but Hogan – for his cussed determination and ability to overcome adversity and dominate his sport – comes closest in character and achievement.

But Hogan was 36 when he suffered his car crash, Woods is 45 and has already endured countless hours, days and months of rehab and recovery from a litany of injuries. So we must fear this might be the end.

As a black man surging into the game with his epic Masters triumph of 1997, winning by 12 shots, Woods tore through the game like no-one before.

He won the 2000 US Open at Pebble Beach by 15 strokes, that year’s Open Championship at St Andrews by eight and when he won the 2001 Masters he became the first player to simultaneously hold all four modern-era majors.

In 2008 he won the US Open at Torrey Pines on one leg, playing with a stress fracture and ligament damage that frequently had him bent double in agony. These gritty exertions ended his season but brought him a 14th major title.

He was the world’s biggest sporting hero until the infamous car crash of November 2009 that led to damaging revelations from his private life and divorce from his wife Elin, the mother of their two children.

Woods put back together his career and reputation despite ongoing injury problems that repeatedly threatened his competitive future. In April 2017 he told shocked fellow Masters winners at the champions’ dinner that he thought he might be done.

The same month he underwent a back fusion operation that saved his career. In September 2018 he won the Tour Championship and was mobbed by joyous fans raucously chanting “Tiger, Tiger” as he triumphantly marched up the 18th fairway.

And better was to follow with that emotional and crowning triumph when he won a fifth green jacket and 15th major title at the 2019 Masters.

The indelible images of that astonishing victory remain undimmed as golf and sports fans across the world wait to see whether Woods can upset the odds one more time and recover sufficiently to compete again.

Those glorious memories fuel hope of yet another comeback. It is an outside bet, but American TV sports host Skip Bayless told his three million Twitter followers: “Tiger Woods, a golfer, has suffered more injuries to more body parts than most NFL players I’ve known.

“If ANYone can come back from horrible leg/ankle injuries, and win again, even another major, it is Tiger Woods. All-time mental/physical toughness. Pulling for him.”

But that feels like an extremely optimistic message. It is abundantly clear that many more huge battles must be won on yet another rocky road of recovery if this golfing great is to compete again.