.css-14iz86j-BoldText{font-weight:bold;}The Ethiopian army has told residents of the northern region of Tigray to “save themselves” as government troops advance on the capital, Mekelle.

“Free yourselves from the junta… there will be no mercy,” he said.

The Tigray People’s Liberation Front (TPLF), which controls the mountainous region, has vowed to keep fighting.

“On south front, they couldn’t move an inch for more than one week. They [are] sending waves after waves but to no avail,” he added.

The government said its troops took over some key towns last week.

However, information is difficult to confirm and claims cannot be independently verified because phone and internet connections have been down since the beginning of the conflict.

The conflict has reportedly killed hundreds and displaced thousands in recent weeks. The UN has warned it could trigger a humanitarian crisis.

On Friday, South Africa’s President Cyril Ramaphosa, in his capacity as the African Union Chairperson, announced the appointment of three former presidents to lead talks to end the conflict.

But Ethiopia has rejected the offer because it sees the operation as an internal “law enforcement” mission.

“We don’t negotiate with criminals… We bring them to justice, not to the negotiating table,” Mamo Mihretu, a senior aide to Prime Minister Abiy Ahmed told the BBC.

What is the fighting about?

The conflict is rooted in longstanding tension between the Tigray People’s Liberation Front (TPLF), the powerful regional party, and Ethiopia’s central government.

When Mr Abiy postponed a national election because of coronavirus in June, tensions escalated. The TPLF sees the central government as illegitimate, arguing that Mr Abiy no longer has a mandate.

On 4 November the Ethiopian prime minister announced an operation against the TPLF, accusing its forces of attacking the army’s northern command headquarters in Mekelle.

TPLF has rejected the claims.

Its fighters, drawn mostly from a paramilitary unit and a well-drilled local militia, are thought to number 250,000.

What else did Abiy’s aide say?

“Our African brothers and sisters would play a more significant role if they put pressure on TPLF to surrender and for that, you know, nobody needs to go to Tigray or Mekelle to make that point clear to them,” Mr Mamo said.

He said that former leaders from Mozambique, Liberia, and South Africa – who are due to arrive in the country in the coming days – would not be able to visit Tigray because of the ongoing military operation.

Communication and transport services has been severely hampered since fighting broke out.

Mr Mamo added that the government was doing its “utmost” to allow UN agencies to provide assistance to people in Tigray.

How bad is the situation?

Aid agencies have no access to the conflict zone, but they fear that thousands of civilians may have been killed since fighting erupted at the beginning of November.

At least 33,000 refugees have already crossed into Sudan. The UN refugee agency has said it is preparing for up to 200,000 people to arrive over the next six months if the fighting continues.

On Friday, the TPLF was accused of firing rockets into the city of Bahir Dar in the neighbouring Amhara region. The Amhara government said there were no casualties and no damage caused.

But the reported incident in Amhara, which has a long-running border dispute with Tigray, has raised concerns that the conflict could extend into a wider war after regional forces were sent to support federal troops.

Meanwhile, the UN has raised concerns about the influx of refugees into Sudan, which it says could destabilise a nation already supporting about a million people displaced from other African countries.

Many of the refugees arriving in Sudan are believed to be children. Aid agencies say an immediate ceasefire would allow them to help thousands of civilians still trapped inside Ethiopia.

Aid agencies are appealing for $50m (£38m) for food and shelter for the new arrivals. 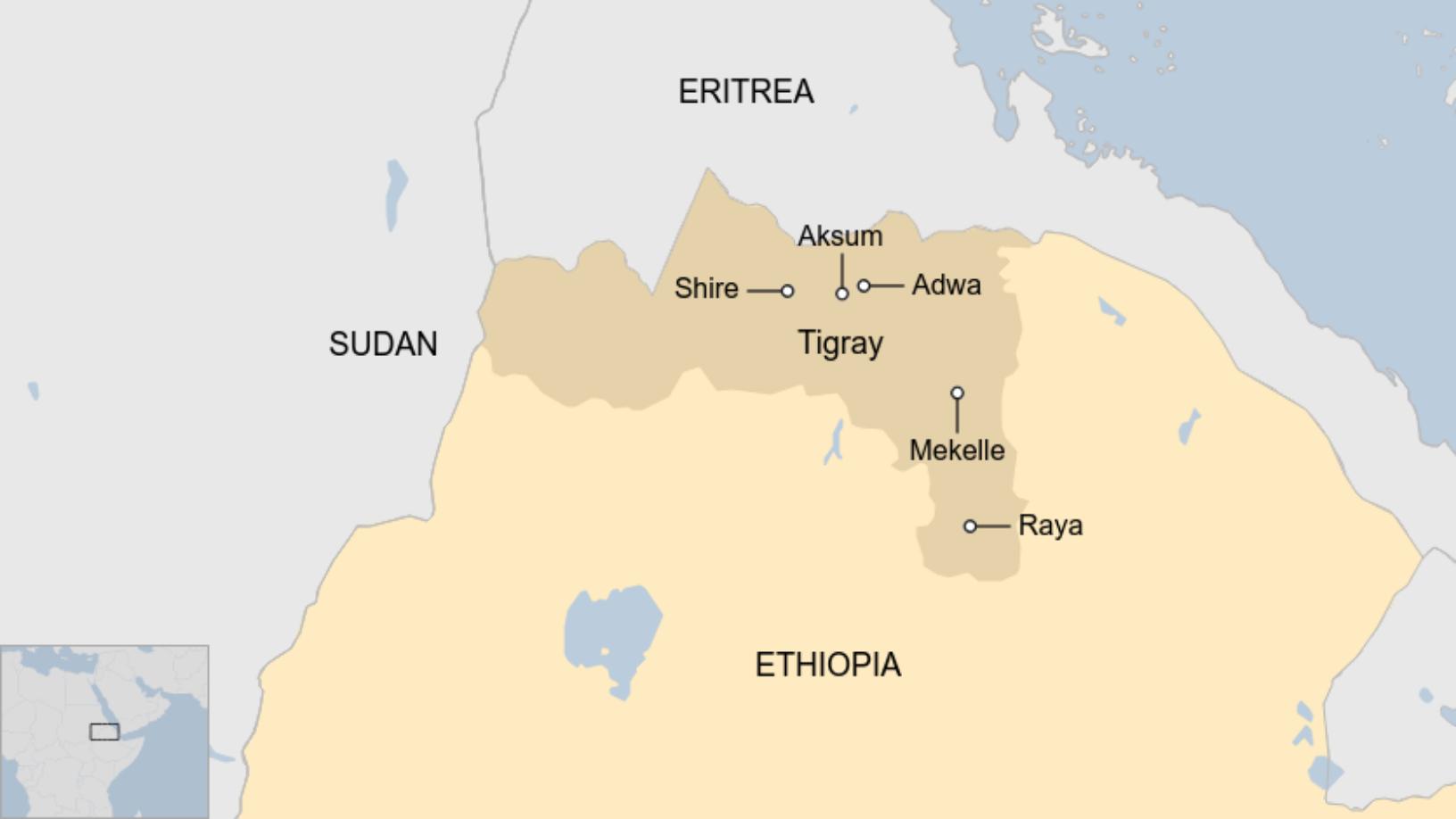 1. The Kingdom of Aksum was centred in the region. Described as one of the greatest civilisations of the ancient world, it was once the most powerful state between the Roman and Persian empires.

2. The ruins of the city of Aksum are a UN World Heritage Site. The site, dating from between the 1st and 13th Century AD, features obelisks, castles, royal tombs and a church which is believed by some to house the Ark of the Covenant.

3. Most people in Tigray are Ethiopian Orthodox Christians. The region’s Christian roots stretch back 1,600 years.

4. The region’s main language is Tigrinya, a Semitic dialect with at least seven million speakers worldwide.

5. Sesame is a major cash crop, exported to the US, China and other countries.