Swarms are devastating crops in East Africa and Pakistan

The worst swarms of desert locusts in decades are now decimating crops and pasture across the Horn of Africa – an area covering Djibouti, Eritrea, Ethiopia, and Somalia – and beyond, threatening the food security of the entire sub-region.

Somalia has declared a national emergency in response to the crisis. It is the second country to do so after Pakistan, where the insects have ravaged cotton, wheat, maize and other crops in eastern areas.

But it is the Horn of Africa that is of most concern, the FAO says, with the locusts breeding so fast that numbers could grow 500 times by June.

A number of countries are on locust alert 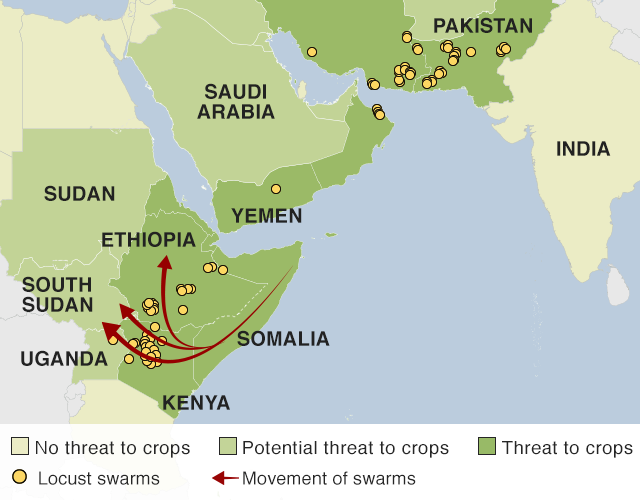 Some swarms could reach Uganda and South Sudan in the coming days and the upsurge could become a regional plague if not tackled, the FAO has warned.

The pests had already destroyed more than 175,000 acres of farmland in Somalia and Ethiopia by the end of December.

The organisation believes one swarm in Kenya covered an area 40km by 60km (25 miles and 40 miles).

How much can a locust consume? 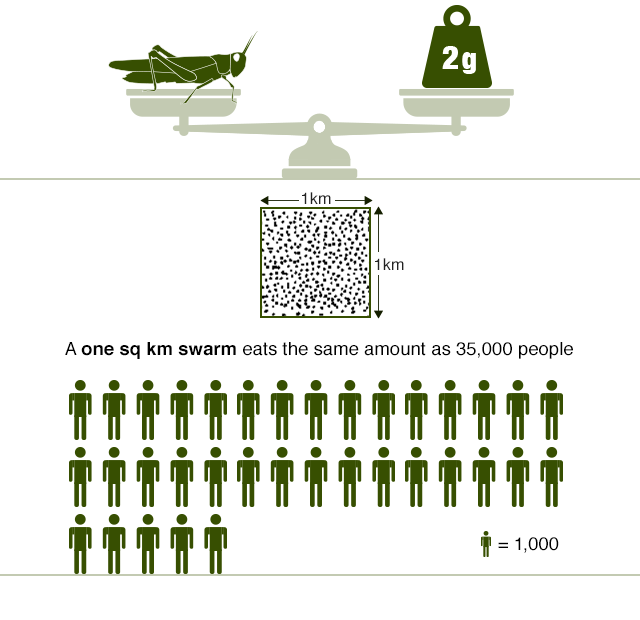 Authorities in the region now fear the locust crisis could lead to a drop in agricultural production, further threatening food suplies in an area already reeling from the effects of floods and drought. More than 20 million people in the region could be affected, the UN says.

“We’re most concerned about Kenya and Ethiopia because these are the two areas that have very large swarms,” says Keith Cressman, the FAO’s senior locust forecasting officer.

“In addition, in Ethiopia, there is breeding going on so there are locusts increasing in number.” 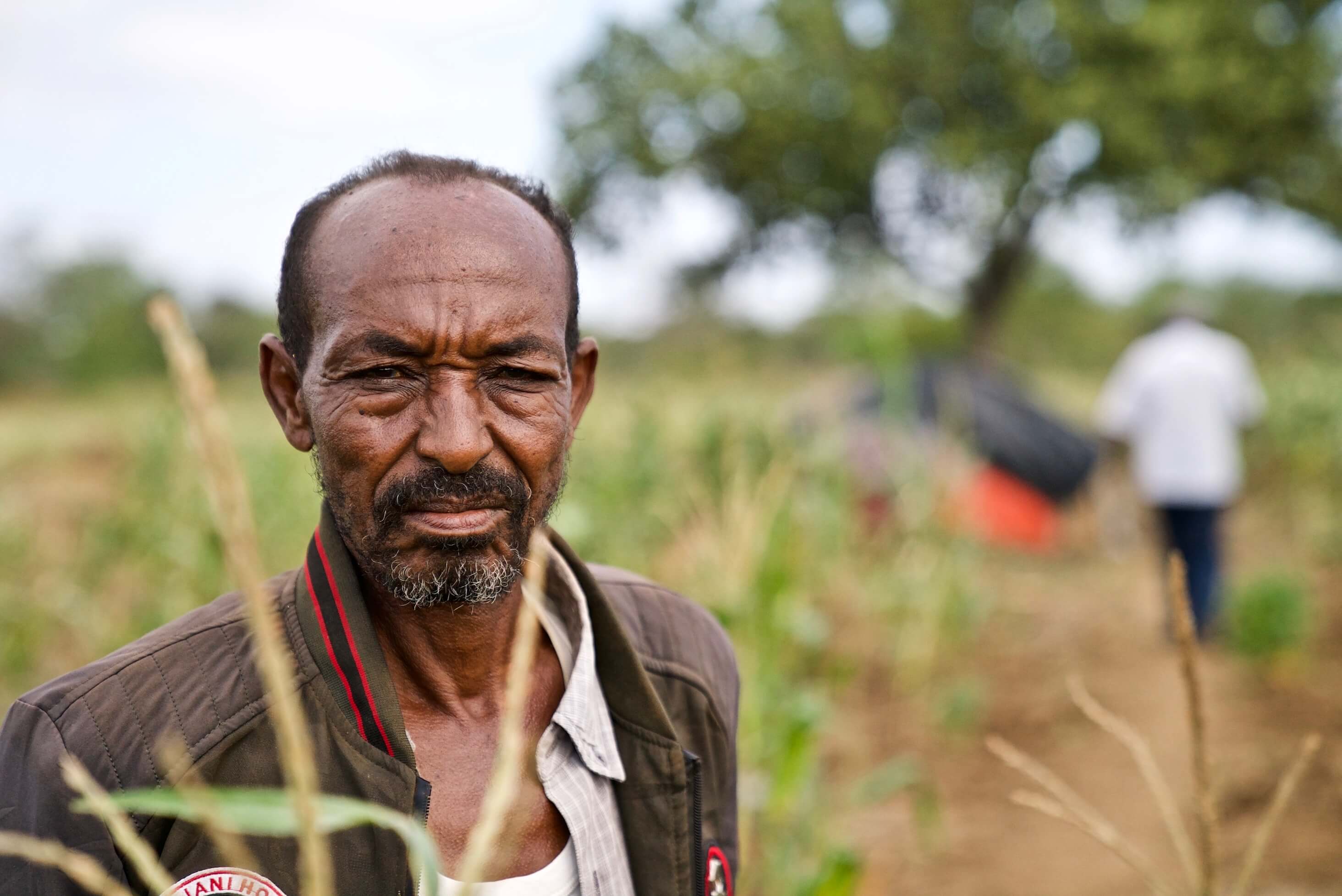 Ali Bila Waqo, a 68-year-old farmer working in north-eastern Kenya, was hopeful of a good grain harvest this season, with recent rainfall ending a long period of drought.

But the locusts have destroyed all his maize and beans.

“They ate most of our grains and what they didn’t eat, dried up,” he says. “That has hurt us a lot. We saw the food with our eyes but we never even got to enjoy it.”

Mr Waqo, who remembers a previous locust infestation in the 1960s, describes how the swarms blacken the skies.

“It gets dark and you can’t even see the sun,” he says.

Extreme weather has fuelled the crisis

The causes of the current infestation go back to the cyclones and heavy rains of 2018-19.

Desert loscusts typically live in the arid areas of about 30 countries between West Africa and India – a region of about 16 million sq km (6.2 million sq miles).

But the wet, favourable conditions two years ago on the southern Arabian Peninsula allowed three generations of locusts to flourish undetected, the UN says.

The upsurge has been developing since 2018 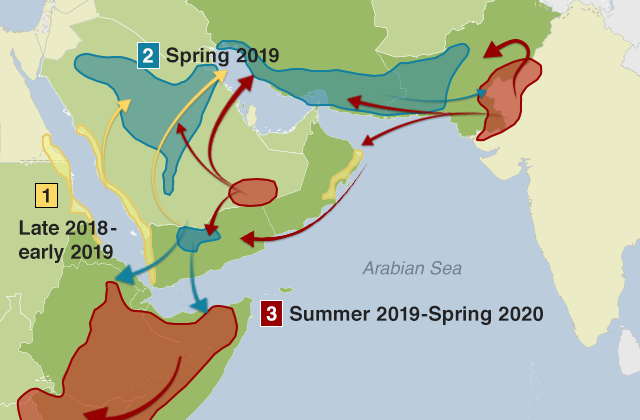 By early 2019, the first swarms headed to Yemen, Saudi Arabia and Iran, breeding further before moving to East Africa.

Further swarms formed and by the end of last year had developed in Eritrea, Djibouti and Kenya. 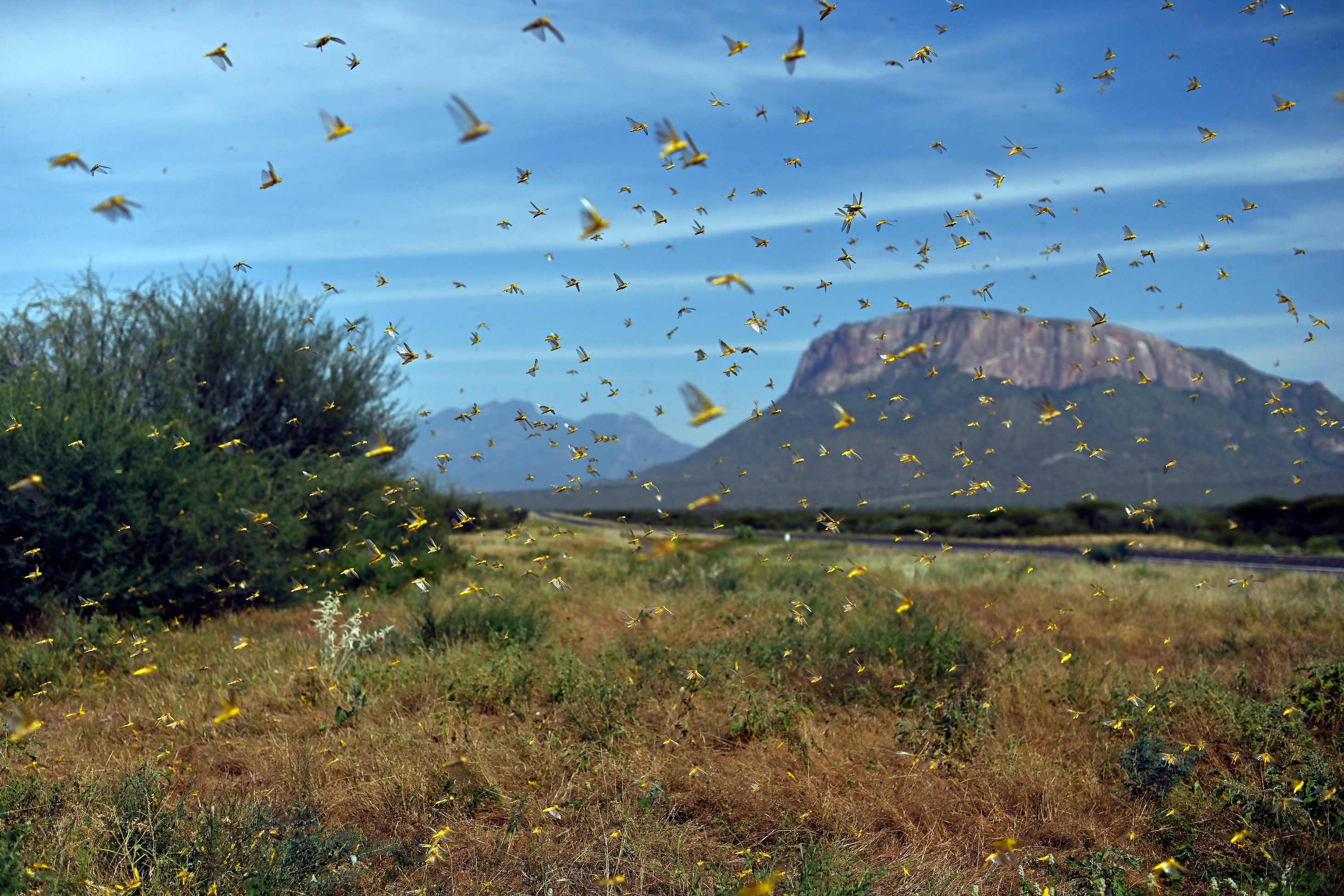 Swarms are also developing along both sides of the Red Sea, affecting Egypt, Sudan, Saudi Arabia and Yemen, and along the India-Pakistan border – a situation the UN has described as “extremely alarming”.

Even though such infestations are notoriously hard to battle because of the wide geographical area affected, the FAO’s Mr Cressman believes more could have been done earlier to tackle this particular locust upsurge.

“If there were greater and more successful efforts of control made in some of the key countries, it might have minimised the situation,” he said.

People are trying to tackle the huge swarms

With the locust swarms in the Horn of Africa now unprecedented in terms of their size and destructive potential, countries are scrambling to deal with them.

Containment of the outbreak depends on two major factors – monitoring and effective control.

The Desert Locust Information Service, run by the FAO, provides forecasts, early warning and alerts on the timing, scale and location of invasions and breeding.

But once populations reach critical levels, such as in the Horn of Africa, urgent action needs to be taken to reduce locust populations, as well as prevent more swarms from forming and spreading.

How locust swarms are tackled 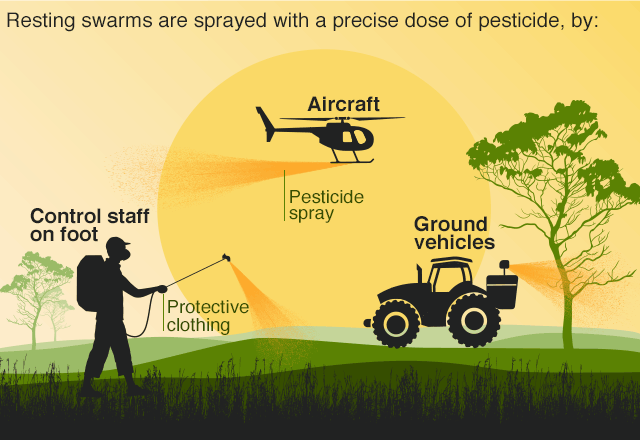 “Very large-scale aerial control operations are needed now in Kenya and in Ethiopia – and ideally in Somalia, but this is just not possible due to the security situation,” says Mr Cressman.

“As the [locust] populations now are mainly in mature swarms, it would be ideal to hit them hard with aircraft, so that we can reduce the number that could mature and lay eggs.”

Although there is ongoing research into more environment-friendly solutions, such as biological pesticides or introducing natural predators, the most commonly used control method is pesticide spray.

Showered onto the pests via hand pumps, land vehicles or aircraft, whole swarms can be targeted and killed with chemicals in a relatively short period of time.

Efforts to combat the invasion in Kenya have intensified with aerial spraying, but controlling such large populations over large, remote areas remains a logistical challenge. 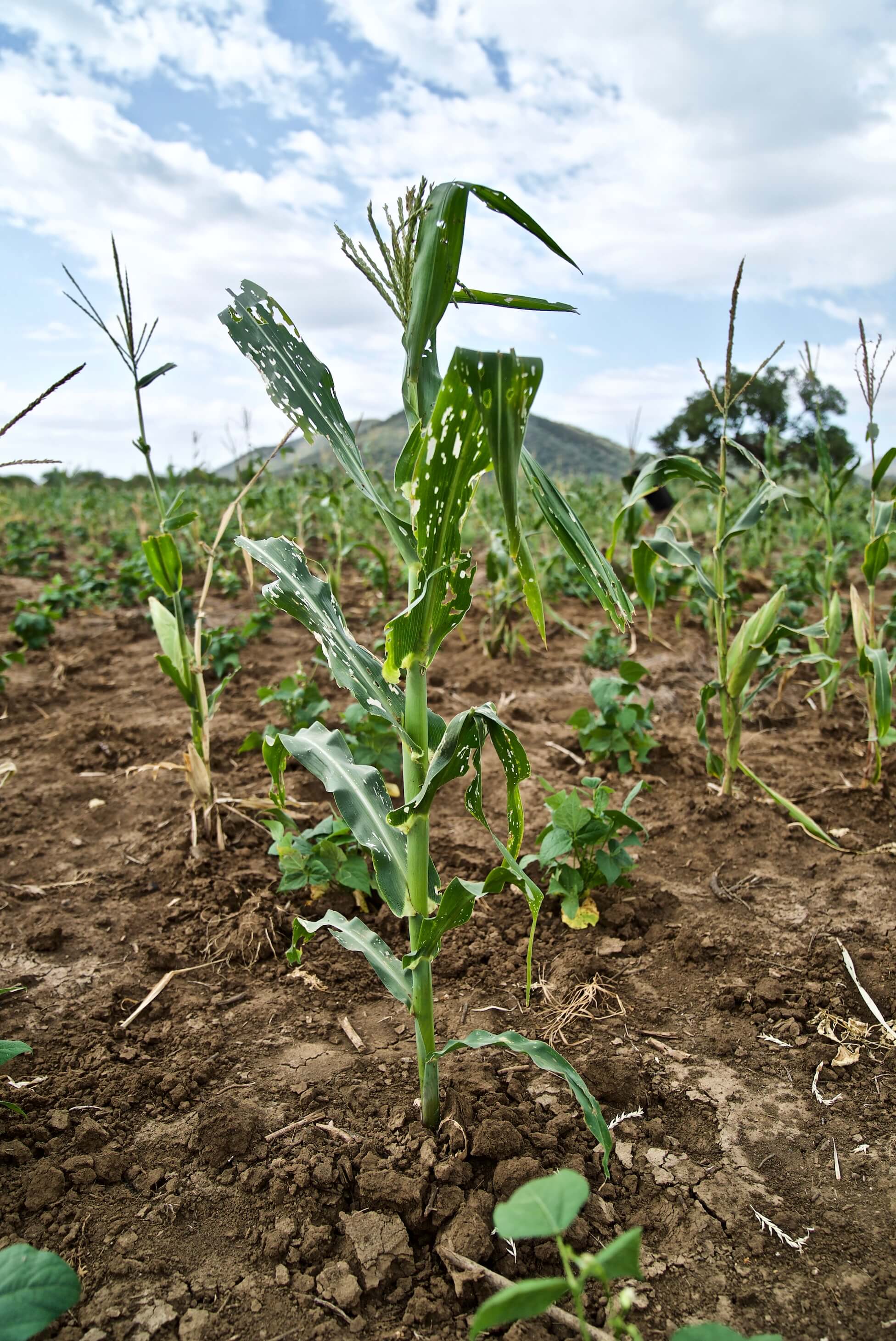 It is especially difficult in countries and regions that have not had to deal with locusts for decades, as there is no infrastructure in place and no collective memory.

“It can cause considerable panic when swarms do come back,” says Mr Cressman.

Action taken in Somalia, Ethiopia and Kenya – as well as Pakistan – will now determine what happens next. If the current upsurge crosses more borders and infests more regions, devastating more crops, it could be declared a “plague”.

The UN says aerial and ground spraying operations in the region are currently “insufficient” and it has appealed to international donors for $70m (£54m) in emergency aid to help tackle the crisis.

But for Kenyan farmer Ali Bila Waqo and his family, any action now will be too late. The only thing they could do to battle the pests when they descended was to bang on jerrycans and shout.

Yet, he remains philosophical about what has happened.