Entire Muslim Rohingya villages in Myanmar have been demolished and replaced by police barracks, government buildings and refugee relocation camps, the BBC has found.

On a government tour, the BBC saw four locations where secure facilities have been built on what satellite images show were once Rohingya settlements.

Officials denied building on top of the villages in Rakhine state.

The UN has described it as “textbook ethnic cleansing”. Myanmar (also called Burma) has denied large-scale killings by its forces.

Myanmar, a majority Buddhist country, continues to deny its troops carried out ethnic cleansing and genocide. It now says it is ready to take some refugees back.

But last month, a second attempt to start repatriating Rohingya refugees failed, after none of the 3,450 people approved by Myanmar to return agreed to do so. They cited the lack of accountability for atrocities committed in 2017, and uncertainty over whether they would get freedom of movement or citizenship.

Myanmar blamed Bangladesh, and said it was prepared to receive large numbers of returnees. To demonstrate this they invited journalists, including the BBC, to see their facilities.

Access to Rakhine is normally tightly restricted. We travelled in a government convoy, and were not allowed to film or interview people without police supervision.

But we were able to see clear evidence of the deliberate eradication of Rohingya communities.

The Australian Strategic Policy Institute, which has been analysing satellite images, estimates that at least 40% of Rohingya villages damaged by the 2017 violence have since been completely demolished.

What did the BBC find in Myanmar?

The government took us to Hla Poe Kaung transit camp, which it says can house 25,000 returnees, who would stay for two months before moving to permanent housing.

The camp, which was completed nearly a year ago, is in poor condition; the communal toilets have fallen apart. It was built on the site of two Rohingya villages, Haw Ri Tu Lar and Thar Zay Kone, demolished after the 2017 violence.

When I asked the camp administrator Soe Shwe Aung why they had destroyed the villages, he denied any had been demolished. But when I pointed out that satellite images showed otherwise, he said he had only recently taken the job and was not able to answer.

We were then taken to Kyein Chaung, a relocation camp, where houses have been built with Japanese and Indian government funding as long-term accommodation for returning refugees. But a Rohingya village called Myar Zin was bulldozed to clear land for this camp, which lies close to a massive new barracks for the Border Guard Police – a unit of the security forces accused by Rohingyas of serious abuses in 2017. Speaking off-camera, officials there confirmed the demolition of Myar Zin.

If returning refugees can’t go back to their original homes, they may be settled in “relocation sites” like Kyein Chaung. It, too, is built on the site of a Rohinya village. 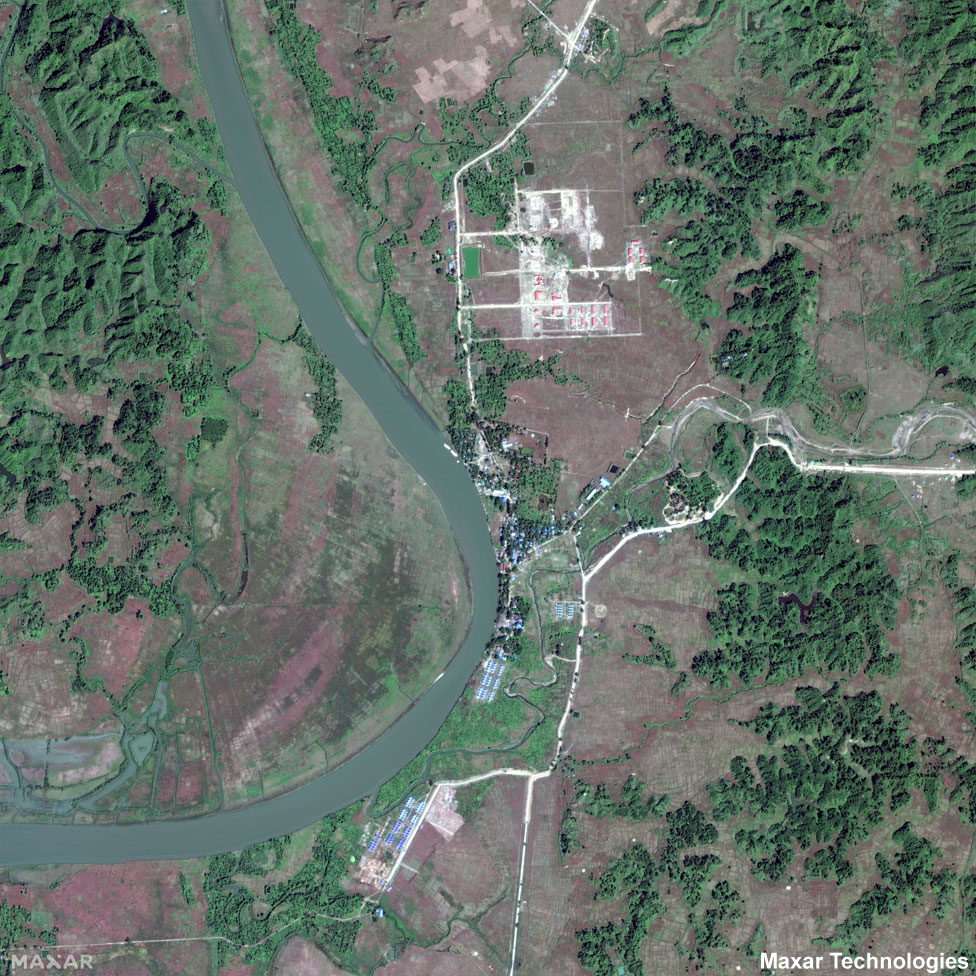 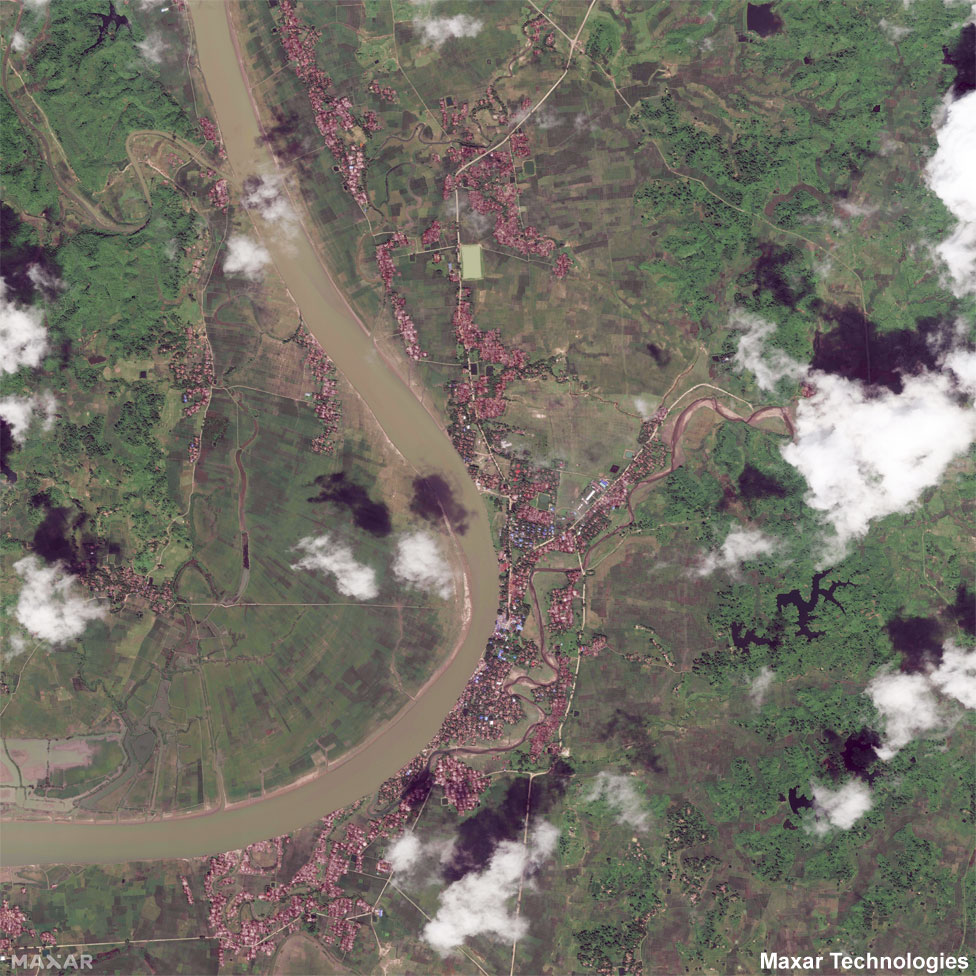 Just outside the main town, Maungdaw, was Myo Thu Gyi, which once had a population of more than 8,000 Rohingyas.

In September 2017, I filmed Myo Thu Gyi while driving past it in another government convoy. Many of the houses had been burned, but larger buildings were still intact, and the trees that usually surround Rakhine villages were still there. But now, passing where Myo Thu Gyi used to be, there is a large government and police complex. The trees have gone.

We were also taken to Inn Din, a village notorious for a massacre of 10 captured Muslim men in September 2017, and one of the few atrocities the Myanmar military has admitted to.

Slide to see how much of Inn Din was destroyed except for the Rakhine Buddhist quarter. New police barracks has been built on the Muslim quarter. 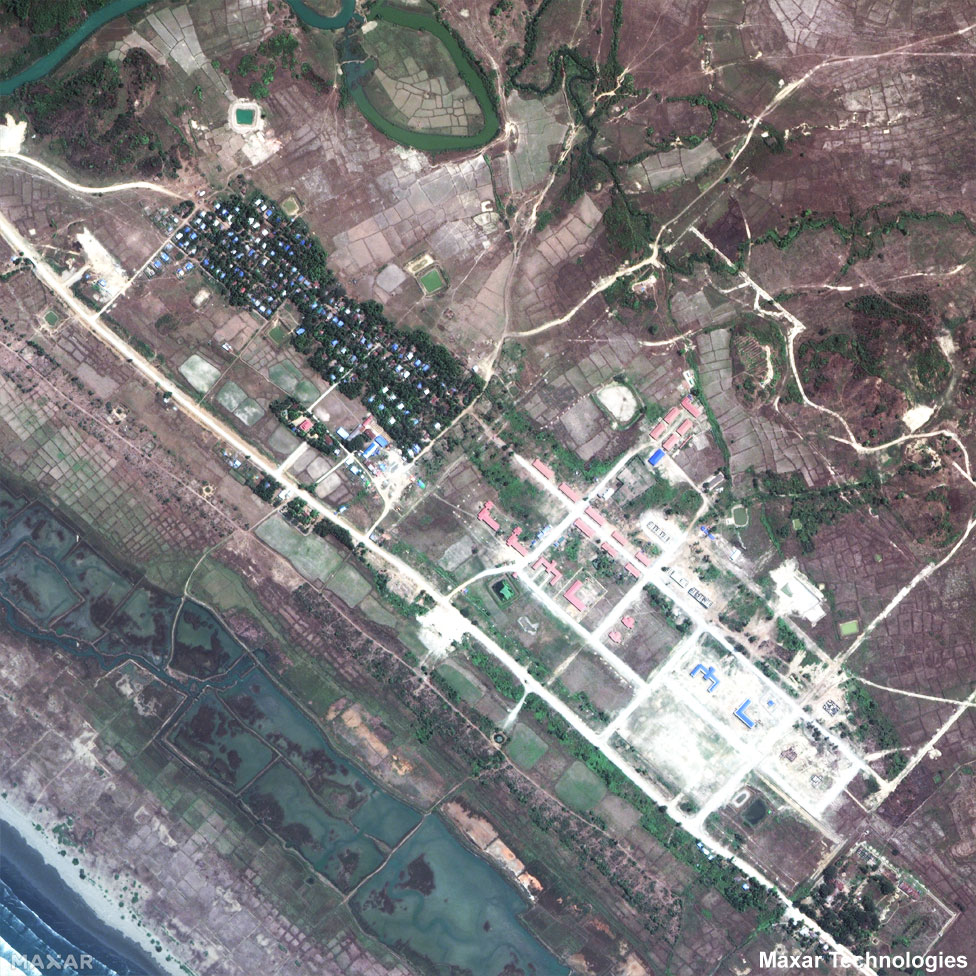 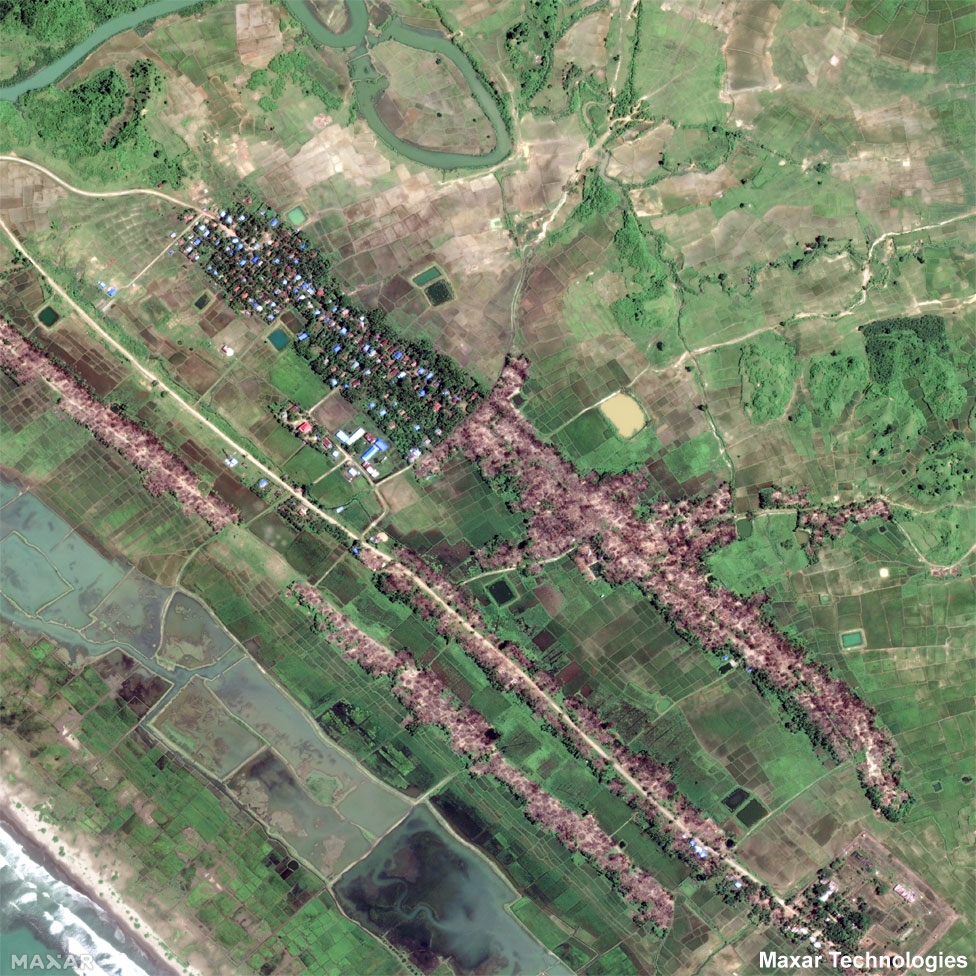 About three quarters of the population of Inn Din was Muslim, the rest Rakhine Buddhist. Today, no trace of the Muslim quarter remains. The Rakhine quarter is quiet and peaceful. But when you reach where the Rohingya houses used to be, the trees have gone, replaced by barbed-wire fences enclosing an extensive new Border Guard Police barracks.

The Rakhine Buddhist residents told us they would never accept Muslims living next to them again.

What does this mean for the refugees?

The extensive and continuing destruction of Rohingya communities long after the violent military campaign of 2017 had ended means few of the refugees would be able to go back to their old lives and communities.

The only visible preparations for a large-scale refugee return are dilapidated transit camps like Hla Poe Kaung, and relocation camps like Kyein Chaung. Few refugees are likely to overcome the trauma they suffered two years ago for that kind of a future. It raises questions over the sincerity of Myanmar’s public commitment to take them back.

I was able to meet a young displaced Rohingya on my way back to Yangon. We had to be discrete; foreigners are not allowed to meet Rohingyas without permission. He has been trapped with his family in an IDP camp for seven years, after being driven out of his home in Sittwe, one of 130,000 Rohingyas displaced in a previous outbreak of violence in 2012.

He is unable to attend university, or to travel outside the camp without permission. His advice for the refugees in Bangladesh was not to risk coming back, and finding themselves similarly confined to guarded camps.

What does the government say?

We approached the Myanmar government’s spokesman for a response to our findings in Rakhine, but have not received a reply.

Officially, the government is committed to a phased return of the refugees, in collaboration with Bangladesh. But ministers still refer to the Rohingyas as Bengalis, who they say arrived in waves of illegal immigration over the past 70 years. There is little evidence of such immigration.

This reflects a widespread belief in Myanmar that they do not belong. The government has refused Rohingya requests for citizenship and guaranteed freedom of movement. It is willing to give them what are called National Verification Cards, which it says could be a step towards eventual citizenship. But most Rohingyas reject these cards because they would be required to identify themselves as Bengalis.

At the height of the military campaign against the Rohingyas in early September 2017, the commander of the Myanmar armed forces General Min Aung Hlaing said they were taking care of what he called “unfinished business” left from 1942.

He was referring to the fighting then between Japanese and British forces in Rakhine, in which Rohingyas and Rakhine Buddhists backed opposing sides, often killed each other, and caused large-scale movements of displaced civilians. The commander said Muslims had flooded into northern Rakhine state over what is today the border with Bangladesh.

The two districts of Maungdaw and Buthidaung on the border, where the great majority of villages destroyed since 2017 were located, was the only region of Myanmar with a Muslim majority. Since the Rohingya exodus the remaining Muslims, perhaps only 10% of the original population, may now be in a minority.

The government’s refusal to allow a credible investigation, to offer freedom of movement or a clear path to citizenship, will deter most refugees from returning. That would leave the balance between Muslims and non-Muslims as it is; perhaps the “unfinished business” is now finished.