Hundreds of people may be trapped on a North Carolina island amid rising floodwater after Hurricane Dorian made landfall, the state governor has warned.

The storm struck the islands popular with holidaymakers days after causing at least 30 deaths in the Bahamas.

Roy Cooper warned of storm surges on the island of Ocracoke, where 800 people were said to have stayed behind.

The official death toll is expected to increase to a “staggering” level, the country’s government says.

Officials are sending morticians and 200 body bags to the Abaco Islands, the worst-hit part of the archipelago.

“The public needs to prepare for unimaginable information about the death toll and the human suffering,” Health Minister Duane Sands told local radio.

What is happening on Ocracoke?

However it lashed the Outer Banks islands with hurricane force winds as far as 45 miles away from the eye and with tropical storm winds up to 200 miles away, the National Hurricane Center said.

Mr Cooper said there was “significant concern” for those reportedly trapped on Ocracoke and urged them to get to high ground. Rescue teams were ready to deploy as soon as the area became accessible, he said.

Now downgraded to a category 1 hurricane, Dorian is moving north-east at about 17mph. It is expected to make landfall again on Saturday in the Canadian province of Nova Scotia.

Life-threatening storm surges and dangerous winds are still expected in Virginia and other north-eastern states.

Three storm-related deaths have been reported in Florida and another in North Carolina. All four people died while preparing their homes and shelters for the storm.

In the Carolinas, more than 900,000 people were ordered to evacuate their homes, but it was unclear how many had complied.

Forecasters said 10 inches (25 cm) of rain had fallen between the coasts of Charleston in South Carolina and Wilmington 170 miles away in North Carolina.

What is the damage to Bahamas?

Dorian hit the Bahamas as a category five hurricane with winds reaching 185mph (298km/h). It matched the highest ever recorded at landfall, and stayed over affected areas for two days.

In its wake, at least 70,000 Bahamians needed immediate humanitarian relief.

The International Red Cross fears 45% of homes on Grand Bahama and the Abacos – some 13,000 properties – were severely damaged or destroyed.

Parts of the Bahamas received up to 35in (89cm) of rain, leaving vast areas of it flooded.

The Island of Great Abaco is virtually uninhabitable, with bodies piled up, no water, power or food, and militias formed to prevent looting, local media report.

The only international airport in Grand Bahama was also devastated. As a result, it could not be used for evacuations or aid deliveries.

What is the latest on the aid effort?

The Bahamas’ government has signed an emergency declaration giving tax exemptions to medicine, building supplies and other goods that can be used for relief efforts.

International aid operations have been primarily focused on Grand Bahama and the Abacos, which were hit worst.

Search-and-rescue teams have been combing the worst-hit communities looking for any trace of survivors and bodies. As of Friday, the US Coast Guard said it had rescued 205 residents. 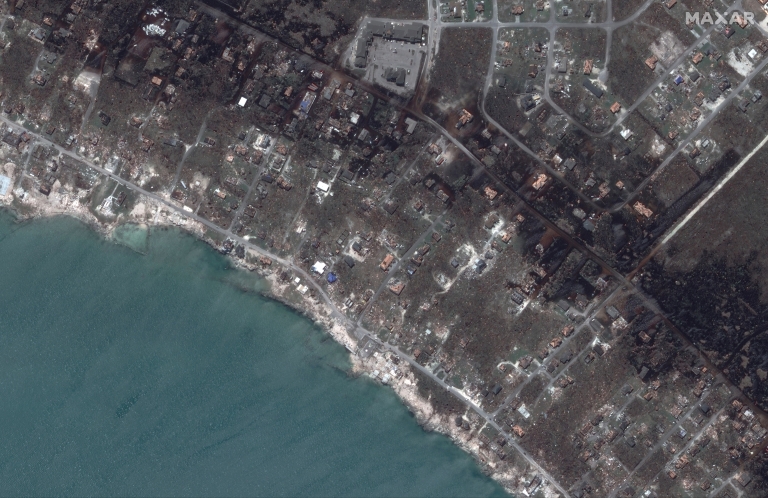 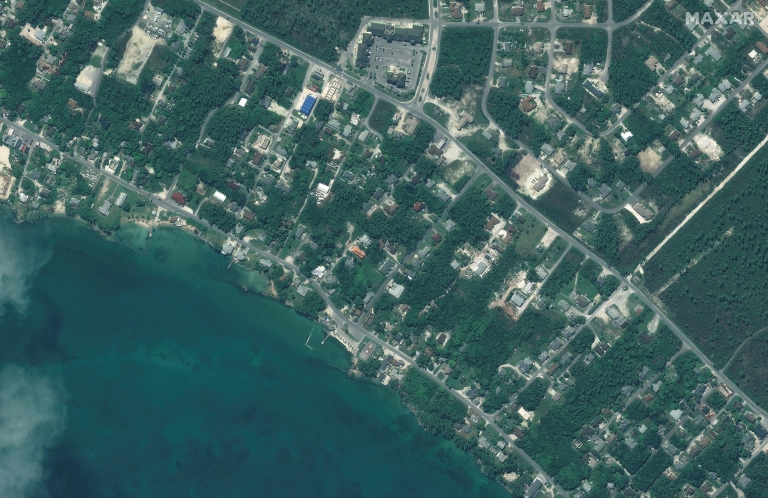 Meanwhile, efforts to deliver aid are being ramped up. Planes and helicopters have been flying in emergency supplies to help the estimated 76,000 people in need of food and shelter.

Eight tonnes (8,000kg) of ready-to-eat meals, storage units, generators and other emergency suppliers are to be flown in from Panama, the UN World Food Programme said.

A $5.4m (£4.3m) budget has been allocated to the UN agency for a three-month emergency operation in the Bahamas.

According to the NHC, a “hurricane season” runs in the Atlantic Ocean between 1 June and 30 November.

The term denotes a period when most of the year’s tropical cyclones take place in the Atlantic, though it typically peaks in the late summer.

Scientists cannot say whether climate change is increasing the number of hurricanes, but the ones that do happen are likely to be more powerful and more destructive because of our warming climate, says BBC Weather’s Tomasz Schafernaker.

Use our guide to see how these deadly storms form, their devastating effects and how they are measured:

A guide to the world’s deadliest storms

Hurricanes are violent storms that can bring devastation to coastal areas, threatening lives, homes and businesses.

Hurricanes develop from thunderstorms, fuelled by warm, moist air as they cross sub-tropical waters.
Warm air rises into the storm.

The storm rotates due to the spin of the earth and energy from the warm ocean increases wind speeds as it builds.

When winds reach 119km/h (74mph), it is known as a hurricane – in the Atlantic and Eastern Pacific – or a typhoon in the Western Pacific.

The central eye of calmer weather is surrounded by a wall of rainstorms.
This eyewall has the fastest winds below it and violent currents of air rising through it.

A mound of water piles up below the eye which is unleashed as the storm reaches land.
These storm surges can cause more damage from flooding than the winds.

“Urgent warning about the rapid rise of water on the SW FL coast with the passage of #Irma’s eye. MOVE AWAY FROM THE WATER!”
Tweet from the National Hurricane Center

The size of hurricanes is mainly measured by the Saffir-Simpson scale – other scales are used in Asia Pacific and Australia.

“For everyone thinking they can ride this storm out, I have news for you: that will be one of the biggest mistakes you can make in your life.”
Mayor of New Orleans Ray Nagin ahead of Hurricane Gustav, 2008

How have you been affected by Hurricane Dorian? Share your experiences by emailing haveyoursay@bbc.co.uk.