Demolition experts are set to blow up what remains of the Morandi bridge in the Italian city of Genoa nearly a year after the structure collapsed.

Thousands of people are being evacuated ahead of explosions to bring down two large towers consisting of about 4,500 tonnes of concrete and steel.

Water tanks have been placed around the towers to prevent the spread of dust.

Forty-three people were killed when part of the bridge, and cars travelling along it, fell 45m (148ft) last August.

It prompted a fierce debate about the safety of Italy’s infrastructure.

The Morandi bridge was a critical structure in Genoa, serving the busy A10 motorway network that serves the Italian Riviera and links northern Italy to France.

What is the demolition plan?

Hundreds of residents, including pregnant women and the elderly, were told to leave on Thursday ahead of the demolition.

More than 3,400 others were being evacuated on Friday morning from the areas surrounding the two towers in preparation for the operation, which is scheduled to take place at 09:00 local time (07:00 GMT).

Roads within a 300m (984ft) radius of the demolition site were set to close.

Explosives have been attached to the legs of the towers and the parts of the bridge still standing.

Dozens of water tanks and sacks were placed alongside and beneath the structure, with the aim of preventing the spread of fine dust by creating a wall of water some 50m high when the explosives are detonated.

The demolition team said the concrete and steel towers would be razed to the ground in about six seconds.

Locals will be permitted to return later on Friday if the area is considered safe.

Parts of the structure that passed over residential homes and business, roads and railway lines were dismantled earlier this year.

What happened to the bridge?

During heavy rainfall on 14 August 2018, a 200m (656ft) section of the Morandi bridge collapsed along with one of its three main supporting towers, crushing dozens of vehicles in busy traffic.

Debris fell on railway lines, a river and a warehouse. A total of 43 people lost their lives.

Hundreds of firefighters attended the scene with lifting gear, climbing equipment and sniffer dogs to try to locate survivors and bodies.

Some residents living in housing blocks under one of the bridge’s pillars were initially told that it was cracking and that their homes were at risk.

Genoa bridge collapse before and after 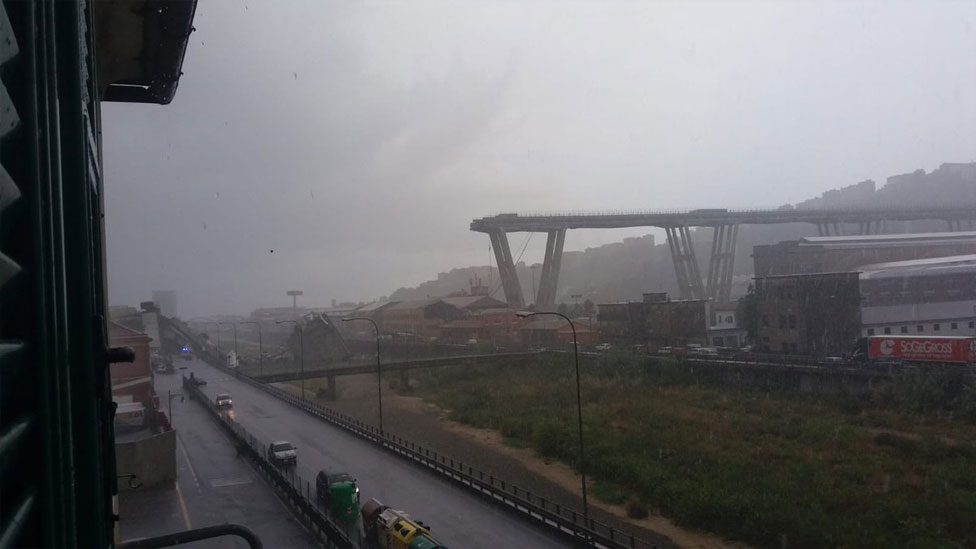 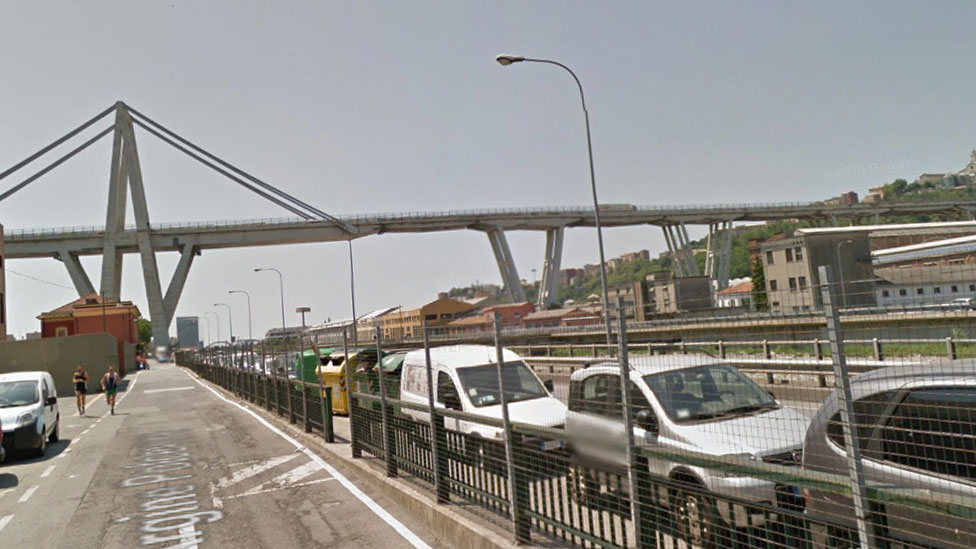 Following the tragedy, it emerged that the steel rods suspending the 1.2km bridge had been slowly decaying over decades and were badly damaged by the sea air.

The degradation may have also been compounded by heavy traffic on the bridge, over which about 25 million vehicles passed every year.

The bridge, designed by Ricardo Morandi, was completed in 1967, but restructuring work was done in 2016 and some major repairs were also carried out in the 1990s.

Such a bridge is normally designed to last for at least 100 years.

In December, renowned Italian architect Renzo Piano agreed to oversee the construction of a replacement bridge, expected to be Europe’s most expensive.