When Guatemalans head to the polling stations on Sunday, two of the candidates who until recently had been tipped as favourites to win will not be on the ballot papers.

Both the former attorney-general, Thelma Aldana, and Zury Ríos, the daughter of the late military ruler, Efraín Ríos Montt, have been barred from running for the presidency and another candidate was arrested in Miami on suspicion of conspiring to import cocaine to the US.

Here is a look at the candidates and the main issues. 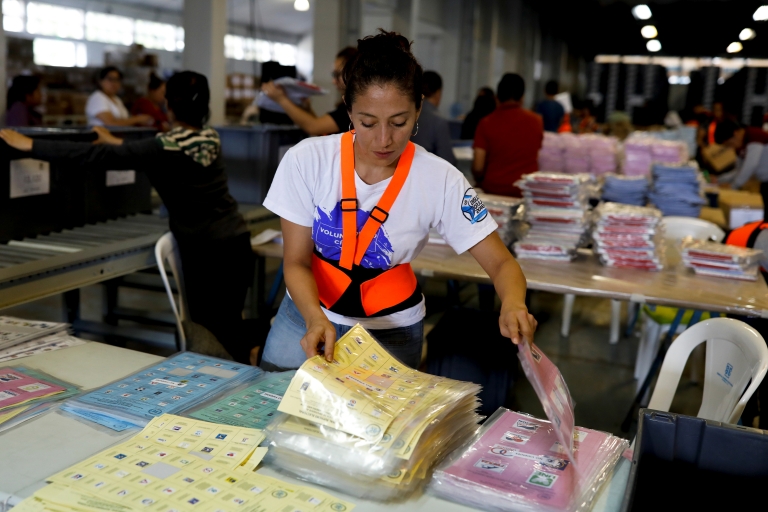 How does it work?

The president is elected by absolute majority for a single four-year term. Under Guatemalan law, current President Jimmy Morales cannot stand for a second term.

If no candidate gets more than 50% in the first round on 16 June, the top two candidates will go through to a second round on 11 August.

Nineteen candidates are competing for the presidency, down from the original 24.

Who are the top candidates?

Sandra Torres: ‘Leaving a loving marriage for the sake of a nation’

Sandra Torres, 63, is hoping it will be third time lucky for her. She failed in her two previous attempts to be elected president but the most recent opinion polls put her in the lead.

Ms Torres was married to Álvaro Colom, who governed Guatemala from 2008 to 2012, and who is currently under investigation for alleged fraud.

She divorced him in 2011 in order to bypass a law which banned close relatives of the president from succeeding him. At the time she said that “I’m divorcing my husband but I’m getting married to the people”.

She also said that she had found it “very difficult” to leave her “loving marriage” to Mr Colom.

In the 2011, her candidacy was rejected by the Constitutional Court but she was allowed to run in 2015. That time, she had enough votes to get her into the second round where she was defeated by Jimmy Morales by a large margin of almost 35 percentage points.

Ms Torres is running for the social-democratic National Unity of Hope party (UNE).

She and her party are under investigation for alleged illegal campaign financing during the last election, which she has denied.

Ms Torres says she will provide “comprehensive solutions like development, fight against poverty and job opportunities” to try to convince Guatemalans to stay in the country rather than migrating to the United States.

The 63-year-old candidate is standing for the right-wing Vamos (Let’s Go) party and this is his fourth attempt at becoming president. Each time, he has run for a different party.

Mr Giammattei is a trained doctor who was named director of the Guatemalan prison system in 2006.

That same year, he led a controversial operation to take control of the Pavón prison, which had been run by inmates for a decade. Seven inmates died during the raids by the security forces.

Mr Giammattei was among eight people accused over the incident and after spending 10 months in pre-trial detention, he was acquitted due to lack of evidence.

He says that if he is elected he will build “a wall of prosperity” to keep Guatemalans from migrating to the US.

In order to lessen the disparity between the rich and the poor, he wants to attract more foreign investment to Guatemala by strengthening the protections granted to private property.

The 49-year-old conservative businessman wants to follow in the footsteps of his late father Álvaro, who governed Guatemala from 1996 to 2000.

Roberto Arzú has never held public office but did preside over one of Guatemala’s most successful football teams. He has had a string of businesses ranging from sports centres to shopping malls.

The outgoing president, Jimmy Morales, named him ambassador with a special mission to promote trade between Guatemala and South America.

He is standing for a coalition made up of the PAN and Podemos parties. His motto has been “Make Guate great!” using the shortened word for Guatemala and imitating US President Trump’s campaign slogan.

He has campaigned mainly on security issues, saying that he will crack down on crime.

A judge in Florida has ordered his arrest over an outstanding debt he owes to Miami-based political campaign strategist JJ Rendón. Mr Arzú says he never signed a contract with Mr Rendón and is therefore not liable for the breach of contract payment.

What are the main issues?

The election was overshadowed by the decision by the constitutional court to bar Thelma Aldana, who had been leading the polls, and Zury Ríos from running.

Polls suggest many voters are undecided and the election outcome is therefore hard to predict.

Guatemalans have told pollsters that their top concern is government corruption.

Four years after large-scale anti-corruption protests forced then-President Otto Pérez Molina to resign, many Guatemalans feel not enough has been done by the government of Jimmy Morales to combat corruption.

Mr Morales caused outrage when he tried to kick the UN-backed anti-corruption commission out of Guatemala when it investigated him over alleged corruption.

The most vocal supporter for the commission, known as CICIG by its Spanish initials, has been Thelma Aldana, who as Guatemala’s attorney general has worked closely with it. Before she was barred, she said she would strengthen CICIG and make government more efficient and transparent.

Mr Arzú, on the other hand, has been openly critical of the CICIG, accusing it of “violating national sovereignty”, and Mr Giammattei said he was opposed to the commission because “justice must be from Guatemalans, for Guatemalans, by Guatemalans”.