Five hundred acres of Blake Hurst’s farm in Westboro, Missouri, are under water.

“In the first round of flooding, we had over 150 acres under water,” Mr Hurst recalls. “A lot of it had been planted, so those crops are lost.”

That was in March, when the Midwest’s first bout of heavy rainstorms coupled with melting snow saw rivers inundate communities. “It’s been one damn thing after another.”

Since then, America’s heartland has had little reprieve from rain. May was the second-wettest month in recorded US history.

In addition to rain, the thunderstorms brought a slew of tornados – over 500 in May alone, according to preliminary reports from the National Weather Service (NWS).

And all the while, rivers and lakes continued to fill and crest, breaking years of records, pouring over levees and barriers, covering highways, bridges and towns. There have been over 35 flood-related deaths in the region so far, according to NWS.

“The US is split in two for hundreds of miles,” says Mr Hurst, who is the president of the Missouri Farm Bureau, describing the water’s sprawl from north of Omaha, Nebraska, down past St Louis, Missouri.

As of 10 June, around 200 river gauges along the Mississippi, Missouri and Arkansas rivers are still reporting flood levels, according to the National Oceanic and Atmospheric Administration (NOAA).

“We’ve seen more flooding in the past decade than we’ve seen in the decades before. This has gone past that into something historic.”

It’s “unusual” for the Great Plains and Midwest, he notes, to see this number of repeated strong storms and severe weather in one spring.

Part of that could be because of El Niño – a natural weather event that brings unusually warm sea-surface temperatures to the Pacific.

“El Niño conditions tend to enhance precipitation and severe weather over the areas that are flooding,” Prof Munoz explains.

“Manmade climate change intensifies these natural variations, causing more rain to fall in what would already have been a wet year.”

Keith Hillman, director of the emergency management team in Vilonia, Arkansas, says his city has seen over 4.5ft [1.4m] of rain since January.

“It’s well above the normal rainfall this year and anytime you have that much rain, it’s gotta go somewhere eventually.

“I’ve been told by our county judge that they think the river won’t be at normal stages until the end of July.”

When I spoke to Mr Hillman last week, his team was preparing for nearby Lake Conway to flood. At one point, officials said the water levels in the lake’s reservoir were rising a foot per hour.

“It’s hard to control Mother Nature,” Mr Hillman told me, resigned. “This is just our time.”

But the way these major rivers are managed could also be contributing to these historic floods.

The Mississippi River system contains an elaborate network of dams, levees and spillways, run by the US Army Corps of Engineers, Prof Munoz says.

“These management efforts have straightened, steepened, and narrowed the river, and our research has shown that these changes cause floodwaters to flow higher and faster.”

Such structures are undoubtedly needed from an economic standpoint, but Prof Munoz says the problem lies in the fact that these systems were designed for a mid-20th Century climate.

“As the climate continues to change, we need to have a conversation nationally and globally about how we are going to live and work in low-lying areas,” he says. “If we ignore this problem, our water management systems will continue to be overwhelmed – and we’ll continue to have our assumptions of what is ‘safe’ from flooding challenged.”

Unlike some disasters, flooding – especially on this scale – is a long haul, says Lori Arnold, director of the Greater Arkansas American Red Cross.

The Red Cross has been operating 10 shelters in Arkansas and around as many in neighbouring states. In addition to providing food and a safe place to stay to hundreds, Ms Arnold notes the volunteers have been providing mental health services, too.

Midwesterners are proud of being self-sufficient, she says. Many try to last out the floods in their own homes as long as possible. But this year things have been different.

“People living on the riverbanks, they’re used to flooding and they hear about this all the time,” Ms Arnold says. “The hardest thing for them is flooding fatigue.”

She says many shelter residents have told her that they were reticent to leave their homes because of how many times official warnings had exaggerated the situation.

“So for those who actually had to leave, they’re a bit in shock because they’d gotten immune to it.”

The Mississippi and its tributary, the Missouri, make-up the longest river system in North America. Floods are expected – but 2019 harkens back to the worst of them. The swollen rivers this spring have broken a dam in one instance and dramatically breached levees across the region.

In 1993, following persistent spring and summer storms, the waters of the Mississippi lurched over their banks and flooded 400,000 sq miles across nine states. Fifty people died. Damages were close to $15bn (£11bn).

It rained nearly every day in June and July of 1993. Forecasts for 2019 predict between 33-50% chances of above-average rainfall on the Midwest’s already water-logged soil.

This week, the National Weather Service had flood alerts along the Missouri, Illinois, Ohio, Arkansas and Mississippi rivers. Waters are receding in parts, but the NWS reports 125 river gauges from Minnesota to Missouri predict a 50% or greater chance of flooding from June to August.

On Sunday, the Mississippi crested in St Louis at just over 46ft – its second-highest in history, and only 3.5ft short of its 1993 record, according to the NWS.

And all along the Midwest, the river stands to break records from 1927 if it remains at flood levels through the summer. AccuWeather estimates the flooding damage along the Mississippi and Missouri rivers is already over $12bn.

See flooding on the Mississippi by moving the slider button 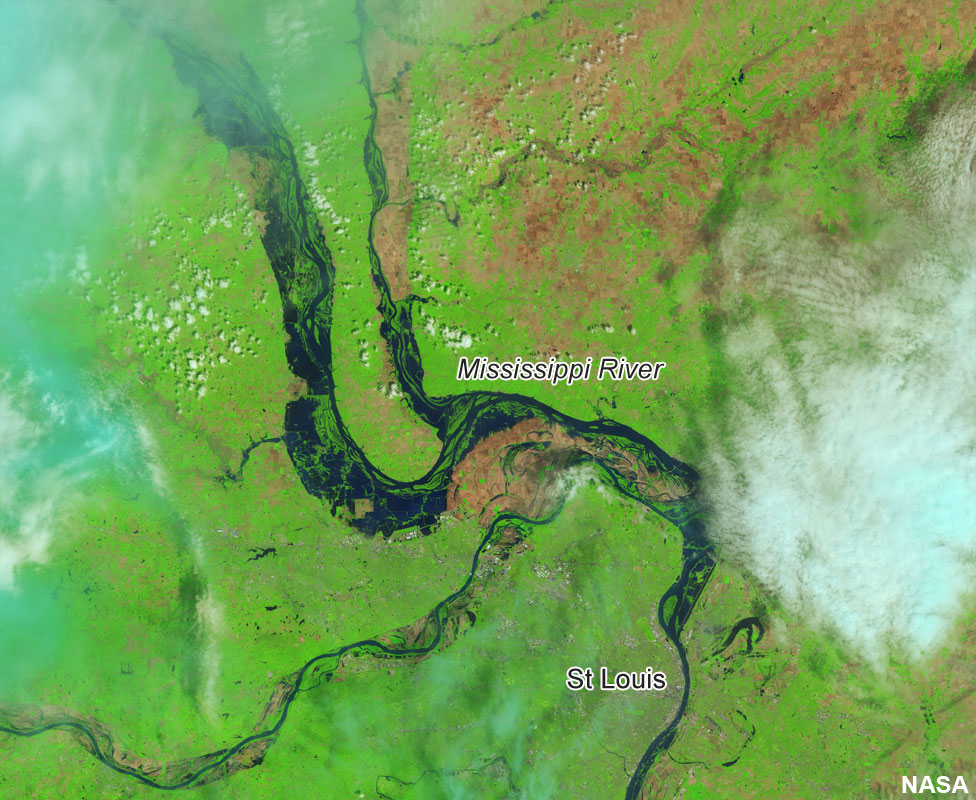 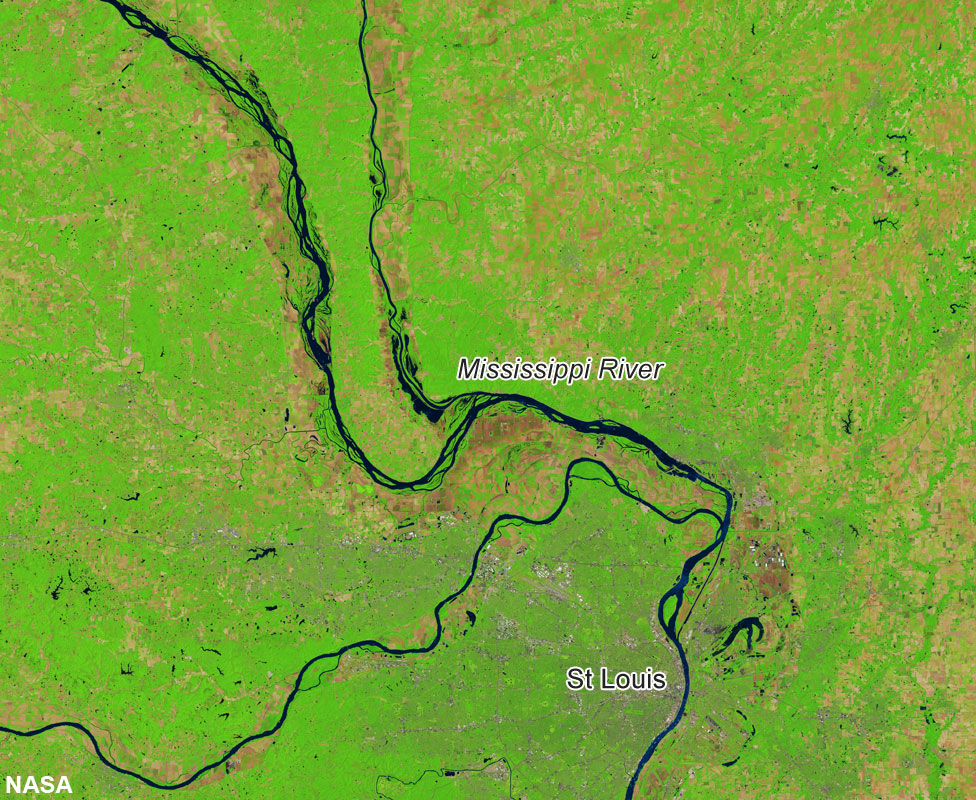 See the flooding near Claremore by moving the slider button 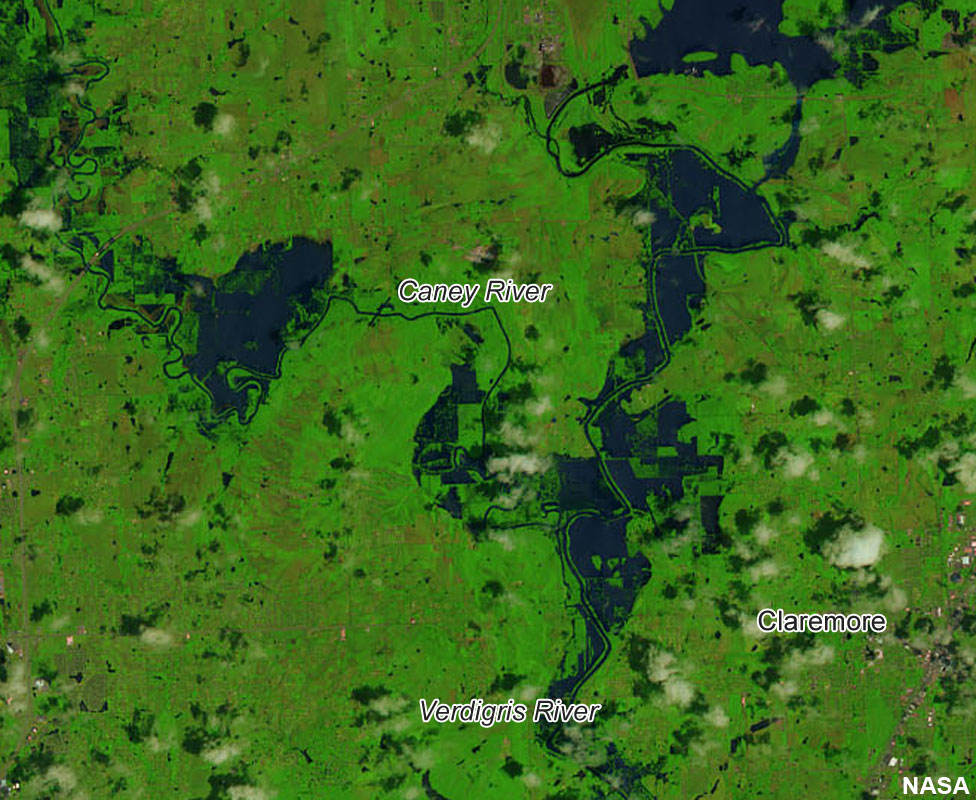 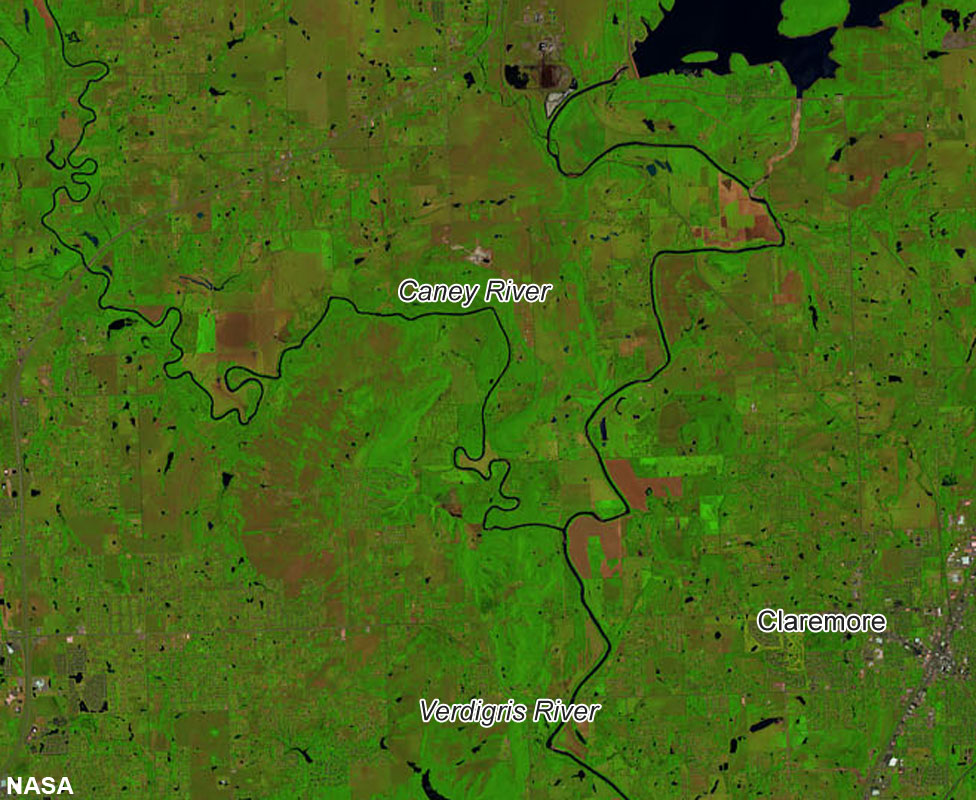 But, barring another system of severe storms, “we’re sort of on the downhill side, I hope”, Mr Hurst says. He adds: “Just because we haven’t had rain in a few days doesn’t mean that people’s homes are dry or that their farms aren’t covered with water.”

And some of the farms that have flooded, he says, were still dealing with damage from local flooding in 2011.

As the floodwaters ebb and the acres of drowned land emerge again, a long clean-up process begins. The receding water leaves feet of sand and mud, rubbish and sewage in its wake, but it will be months yet before proper clean-up efforts can start – let alone farming.

Mr Hurst says some farmers believe climate change has caused the severe weather this year, while others blame improper management of river operations.

“It doesn’t matter whether our problem is caused by poor management or climate change, we need to figure out how to do better,” he tells me.

“Having said all that: Would any kind of management of the river prevented flooding in 2019? No. There’s nothing that could have prevented this.”