Novak Djokovic won a record seventh Australian Open title and a third successive Grand Slam as he swept aside Rafael Nadal in Melbourne.

The Serb, rarely troubled on his serve, won 6-3 6-2 6-3 for his biggest victory in a major final over his great rival.

A forehand winner down the line brought up two championship points, Djokovic taking the second when Nadal clubbed a backhand long.

Djokovic, who was the top seed, fell to his knees after sealing another triumph on Rod Laver Arena, smacking the court with both hands and screaming towards the sky.

The reigning Wimbledon and US Open champion claimed his 15th Grand Slam title, moving him outright third ahead of American Pete Sampras in the all-time list, closing in on Switzerland’s Federer (20) and Nadal (17).

Djokovic has now won 13 of his past 16 meetings with Nadal, who has not beaten the Serb on a hard court since the US Open final in 2013.

He leads 28-25 in their record 53 meetings between two male players.

Djokovic continued his fine record of going on to win the tournament every time he has reached the semi-finals, while Nadal lost for a fourth time in the Melbourne showpiece.

The result meant the 2009 winner was unable to become the first man in the Open era to win all the Grand Slams at least twice and was the first time he had lost a major final in straight sets.

Djokovic said his clinical semi-final win over French 28th seed Lucas Pouille on Friday was one of his best performances on Rod Laver Arena.

Two days later, he surpassed that against the man with whom he shares what many consider to be the greatest male rivalry.

Most expected a much closer encounter between the pair, whose previous meeting at Melbourne Park had been the epic 2012 final, which lasted five sets and almost six hours.

Quickly it became apparent that a repeat was unlikely in front of a stunned crowd.

Djokovic was as close to flawless as he could have been – dominating on serve, controlling the rallies with crisp groundstrokes, rarely making a mistake and showing incredible athleticism around the court.

His tally of 34 winners and nine unforced errors highlights how high his level was.

The Serb made a fast start by breaking in Nadal’s first service game and, although that was the only break in the opener, the gulf between the players felt much wider.

He took his first set point after landing a first serve which Nadal could only bat back into the net, wrapping up the opener in only 38 minutes.

More pressure came on Nadal’s serve immediately in the second set, Djokovic eventually going a break up in the fifth game and, after surviving Nadal taking him to deuce in the following game, broke again to leave him serving for a two-set lead.

Djokovic then underlined his dominance by firing down three aces to leave him one set away from the title.

Another break for a 2-1 lead in the third put Djokovic on his way to a comfortable win, before he fought off a break point in the sixth game and then sealed victory on the Nadal serve.

Nadal sees positives despite being outclassed

Nadal had not dropped a set on his way to the final but, having come into the tournament without competitive action since September’s US Open, he was nowhere near the level required to cause problems for an in-form Djokovic.

The Spaniard looked like he lacked belief as he made a slow start, winning only one point in the opening three games.

Nadal particularly struggled to make an impact on Djokovic’s serve, not managing to win a receiving point until the ninth game and with more than half an hour on the clock.

Nadal continued to toil in the second and third sets, although a rare error from Djokovic brought up a first break point for the Spaniard after one hour and 46 minutes.

However, a backhand into the net left Nadal grimacing and looking up the sky in frustration as the chance – and the championship – slipped from his grasp.

The Spaniard won 53 points compared to Djokovic’s 89, and took only 13 receiving points.

“I have been going through tough times over the past year. I only played in nine events and had to retire from two, and I was not able to play professional match since the US Open,” said Nadal.

The Spaniard, who cut short his 2018 season with an abdominal muscle problem and to have ankle surgery, retired injured in the quarter-finals in Melbourne last year.

“Even though tonight was not my night, it was very important for me in coming back from injury,” he said.

“I believe I played a good two weeks of tennis and it is a great energy and inspiration for what is coming.

“I will keep fighting and keep practising to give myself better chances in the future.”

Australian great Rod Laver, watching in the arena which bears his name, said before the final he felt Djokovic would eventually overtake both Federer and Nadal in terms of Grand Slam titles.

On the evidence of this victory, and his performances over the past six months, few would disagree.

Djokovic was ranked outside the world’s top 20 in July after coming back from elbow surgery.

But he showed he was back to his best with victory at Wimbledon and followed up that performance with another triumph at the US Open in September.

Now Djokovic, who reclaimed top spot in the rankings in November, will go to the French Open in May aiming to hold all four major titles simultaneously for the second time.

Victory over Britain’s Andy Murray in the 2016 French Open final meant Djokovic became the first man since Laver in 1969 to hold all four Slams at once.

“I’m trying to contemplate on the journey in the past 12 months. I had surgery exactly 12 months ago,” Djokovic said.

“To be standing now here, in front of you today, managing to win this title and three of the four Slams is truly amazing.” 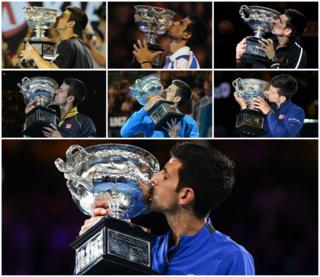 This was one of the great Grand Slam final performances by Djokovic. He simply knocked the stuffing out of Nadal.

The offensive side of Nadal’s game, which had been so eye-catching in earlier rounds, was snuffed out by Djokovic. The world number one took all of Nadal’s time away and forced him on the defensive from the very first ball.

If he wins Roland Garros in June, he will hold all four Grand Slam titles simultaneously for the second time in his career. This might just be the best chance Djokovic has ever had to win all four Slams in the same calendar year.

Nadal will have a lot to say about that – especially in Paris. The Spaniard felt four months away from the Tour caught up with him here: as he says, he was just not able to find the higher gear required to make the match competitive.

He is, though, optimistic things will look a lot brighter in a couple of months’ time: just as the clay-court season looms into view.